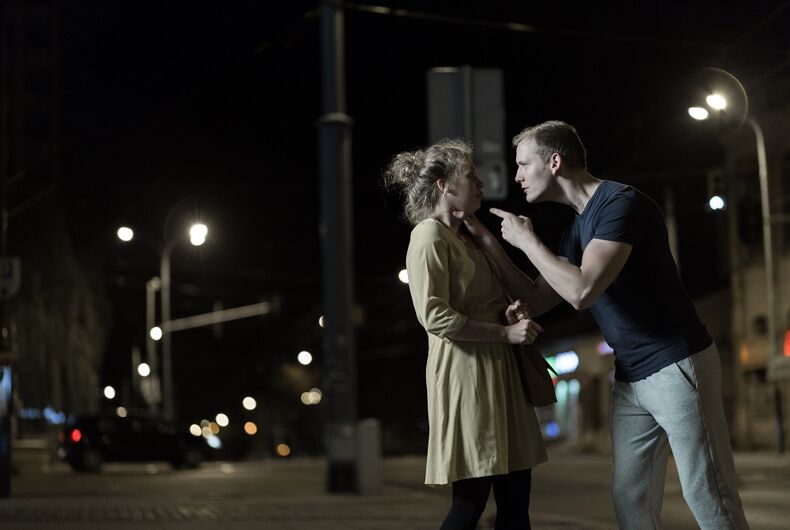 Five lesbian women were severely beaten in an attack by 15 men outside of a club this weekend.

According to a report from the Portsmouth News, a group of women was leaving the Blue Anchor pub last Sunday in Portsmouth, England, when a group of men started shouting homophobic insults at them.

According to accounts from witnesses, a chaotic scene unfolded. The men started to attack the women, pushing them to the ground and beating them.

As women leaving the pub rushed to help the victims, more men joined in the attack that lasted 10 minutes according to police, but that a victim said “seemed like forever.”

“There was children there and the women were begging them to stop. It was like a riot from their side,” one of the victims said.

The attackers eventually let up on their attacks on the group and focused on one 32-year-old woman.

“There was just a massive group, at last seven, they were just punching me,” this victim said said. “I just remember trying to protect myself. They were trying to get me on the floor.”

Another victim added, “There was at least seven men on her, they would not stop hitting her.” Another victim said that the 32-year-old was hit “at least 20 or 30 times,” and that the men wouldn’t stop even though others were begging them to.

The attackers fled when police arrived on the scene. “They dropped her like she was nothing and ran back into the club,” one of the victims recounted.

“There was blood everywhere,” the 32-year-old victim said. The police say that they immediately called an ambulance.

The friends now fear going out and one of them says she’s been having nightmares.

A 23-year-old victim had seven teeth knocked out in the attack, and was left with a fractured jaw.

Another victim was left bleeding and in seizures.

The victims have asked for their names not to be publicized but have released images of their injuries to try to get justice.

Police say that the victims have been in contact with the Lesbian and Gay Liaison officer.

The Blue Anchor, for its part, condemned the “disgusting unprovoked homaphobbic attack” but denies that it occurred outside the bar. Instead, the owner said on Facebook that the attack occurred outside the S2 Club, located 80 yards down the street. Police did not respond to our inquiry about the exact location of the attack by the time of publication.

One of the victims said, “It was horrendous, I’ve never seen anything like it.”