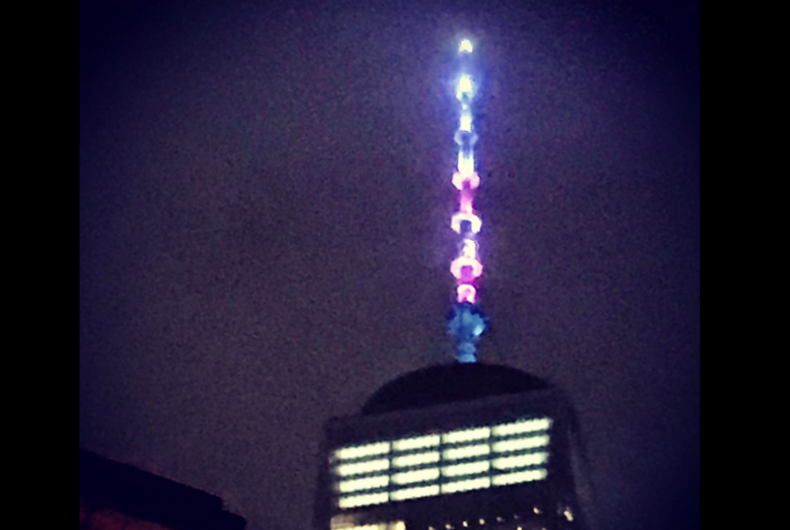 1 World Trade Center lit up with the trans pride colors for Transgender Day of Visibility 2017.Photo: Hannah Simpson via Twitter

One World Trade was lit up with the colors of the transgender pride flag — pink, white, and blue — for the first time yesterday, in honor of Trans Day of Visibility.

#OneWTC will be lit tonight for #TransdayofVisibility #tdov2017 #tdov

The NYC landmark follows the Wells Fargo building in Charlotte, North Carolina, which last year became the first skyscraper to display the trans pride colors on Trans Day of Visibility, according to transgender activist Hannah Simpson.

“NYC and NY State are working hard to make it clear that trans identities are seen, respected, and welcomed here. We have a proud history of welcoming huddled masses yearning to breathe free, with beacons piercing through the sky,” she told LGBTQ Nation, referencing the Statue of Liberty.

The colors of the transgender pride flag were conceived by Monica Helms as a supplement to the rainbow flag, Simpson explained. She believes that rainbow flag creator Gilbert Baker, who was remembered in a vigil that same night, would have been happy to see the building lit up in pink, white, and blue.

“Having met him once in person, I know he would have been thrilled,” Simpson said.

One World Trade Center showed its support for the LGBTQ community as a whole by displaying rainbow-colored lights following last summer’s massacre at Pulse night club in Orlando.

Though the symbol of support was fleeting — and somewhat fogged in — Simpson said that it’s just a reminder of everyday visibility and support.

“I wish the Port Authority and Governor’s office would let us keep the lights up a little longer, especially given the weather, but I am not pushing it. The real irony is that every day is a day of transgender visibility,” she said. “Flying the flag reminds the haters that we won’t just crawl back under a rock for the next 364 days.”