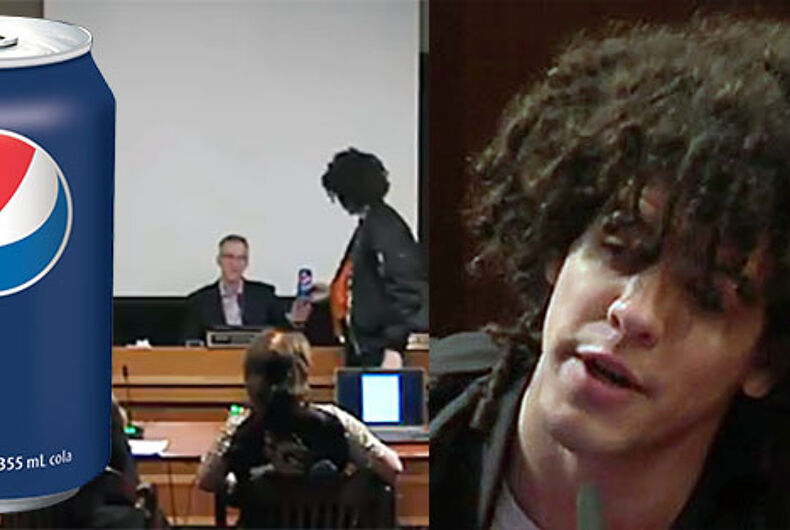 Taking his cue from Kendall Jenner in the controversial new Pepsi commercial that has been the talk of social media, a man in Portland, Ore. interrupted a tense city council meeting on Wednesday to offer the mayor a can of soda, and quickly learned the difference between reality and television.

The reaction to Carlos Enrique’s gesture was not anything like what happened when the Kardashian daughter of Caitlyn Jenner handed a Pepsi to a cop at a peace protest in the ad. Not even close.

“Whoa, whoa, not a good move, not a good move. Don’t do that again,” Mayor Ted Wheeler said, concealing nervous laughter as the tall, brown-skinned man wearing dreadlocks stood over him, brandishing the blue can. Enrique pulled out a second can and popped the tab while still standing in front of the councilors, apparently hoping for a cheer, or smiles, or something like in the now-withdrawn Pepsi ad.

Instead there were gasps as the mayor accepted the Pepsi, two security officers rushed over, confiscated the cans, and escorted Enrique out of the council chambers.

“Not a smart move,” Wheeler repeated, adding “Thank you, I do appreciate it, but don’t do that again.”

As CBS News reported, city councillors were discussing an ordinance that would allow Portland to tow away boats from city docks. Enrique was testifying on the issue but when he started to go off on a tangent, Mayor Wheeler interrupted him, and that’s when Enrique stood up, approached the mayor, reached into his jacket pocket and clearly startled everyone present.

“That was terrifying,” Commissioner Amanda Fritz said softly to her colleagues.

CBS reported this was not the first “security scare” at a Portland City Council meeting. Mayor Wheeler enacted tighter security measures after city hall was put on lockdown last month because of a protest over a fatal police shooting, and prior meetings have reportedly been interrupted by loud protesters shouting profanity and slurs, jeering at city hall employees, even camping outside Wheeler’s home, allegedly slashing his tires, according to Oregon Public Broadcasting.

Enrique reportedly identified himself as a journalist but published reports questioned his credentials. Video of the incident was recorded and posted on YouTube and can be seen at approximately two hours and 51 minutes in.