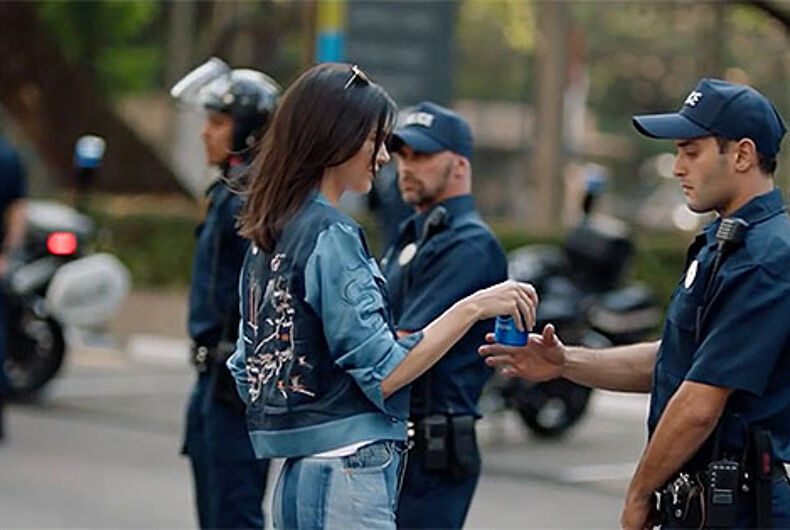 UPDATE: Pepsi has pulled the ad – and apologized to Kendall Jenner!

If there’s only one television commercial you watch today, this is the one everybody’s talking about: Pepsi’s “Live for Now” campaign featuring Kendall Jenner as a supermodel who ditches her blonde wig and smudges away her perfect burgundy lipstick to join attractive, young and diverse protesters marching for… or is it against…. what?

It’s not clear, other than they are really into the symbolism for “peace,” from the signs they hold and wave. One of the demonstrators might be transgender.

But then “the moment” comes, as Jenner grabs an ice-cold Pepsi, which actors have been drinking throughout the artfully-filmed ad, and the Kardashian girl whose parents are Caitlyn and Kris Jenner hands one to one of the stoic police officers lining the protest march, who drinks it and…

Cue the cheering crowds! And cut.

The reaction on Twitter, especially from actual activists, is best described as “WTF?”

Grab em by the Pepsi #Pepsi

.@Pepsi, this ad is trash. pic.twitter.com/x4iUd6hJYm

"But you said you wanted social media to talk about Pepsi." – Advertising guy to Pepsi executive before agency is fired.

"Kendall please! Give him a Pepsi!" pic.twitter.com/IntFNmCpTr

If this #Pepsi ad is the choice of a new generation, Im gonna need that generation to turn in its badge.

I have a Pepsi." pic.twitter.com/NW0sddKOOI

This Pepsi ad is so unrealistic. Those protesters would have been Dr. Pepper Sprayed. https://t.co/oNjjtm6eFu

That Pepsi commercial already has a parody. pic.twitter.com/Es7Tjprn7B

"Look fam, I don't really rock with you, but Kendall said if we just hand them a Pepsi we can end this whole thing real quick." pic.twitter.com/WZRoGqyQOB

The Pepsi ad is what happens when there's no black people in the room while decisions are being made. This clearly wasn't a great idea.

Kendall Jenner gives a Pepsi to a cop and rids the world of -isms. Y'all can go somewhere with this tone-deaf, shallow and over-produced ad. pic.twitter.com/CEr4cAw3Ld

J. Edgar Hoover takes aim from the grassy knoll. The motorcade approaches. He fires. JFK raises a #Pepsi to his lips, blocks the bullet.

The worst part of the Pepsi commercial is when Kendall decides to protest racism by making a black woman hold her wig. pic.twitter.com/NEfSwXqJvm

I'm boycotting all @Pepsi products until they apologize for this blasphemy. Here's a list of their brands: https://t.co/9Rf91nLVyX pic.twitter.com/HsvUvj27Bl

I could spend the rest of my life trying and not even come close to making something as funny as this Pepsi ad. https://t.co/C5qG1trHKg

The Pepsi president of marketing in tomorrow morning's meeting: pic.twitter.com/ULhHiVuO9n

Blink 182 guitarist responds to homophobia like a rock star