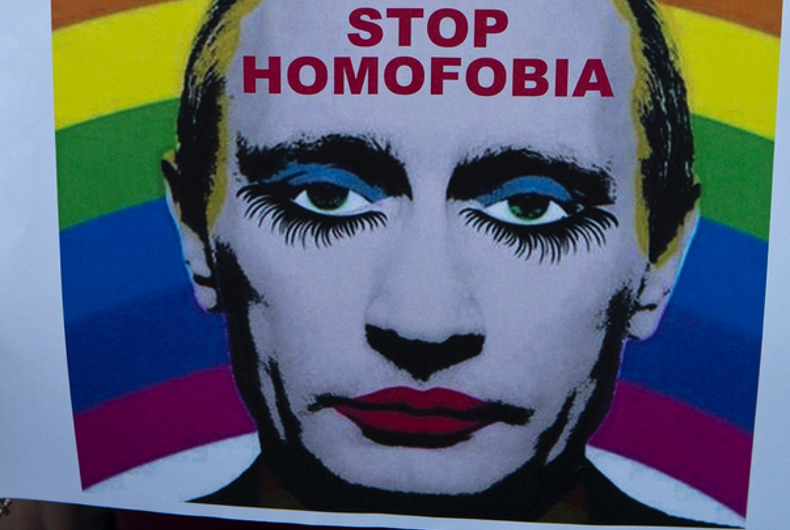 Russia has banned an image of President Vladimir Putin in make-up, making it a crime to share the image on social media.

The Justice Ministry was acting on a court ruling by the Central Regional Court of Tver which banned a number of images posted to social media by A. V. Tsvetkov. The other images included depictions of Putin as a Nazi and what appears to be a meme advocating violence against Asians and Jews.

The government has refused to confirm which image it is. Court records say the image shows Putin “with eyes and lips made up,” captioned with an anti-gay slur, and implies “the supposed nonstandard sexual orientation of the president of the Russian Federation.”

Tsvetkov was released from criminal liability under the country’s hate speech ban but sentenced to compulsory psychiatric care.

Gay Putin memes have proliferated as Putin has reduced freedoms related to speech and sexuality in recent years. And Russia has also banned anonymous blogs with over 3000 daily readers, forcing the writers to register with the government.

The gay Putin meme is the 4,071st entry in the list of banned extremist materials.

The Moscow Times believes that this may be the image in question:

A Russian court has banned an image suggesting Putin is gay & sentenced the culprit to compulsory psychiatric care. https://t.co/rUlOO5r6lp pic.twitter.com/hbkDHcndY5

Another Russian news site believes that it’s this image:

Now this is real: Man ejected from a council meeting for offering mayor a Pepsi