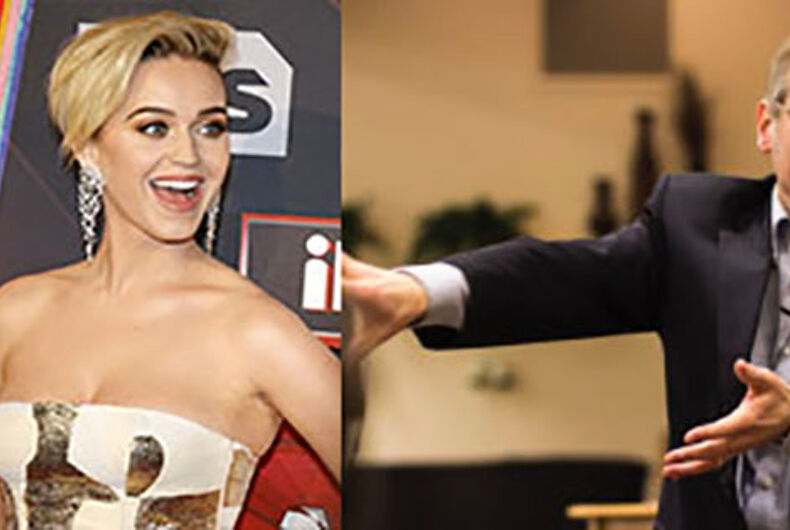 Remember the pastor who made headlines last fall by calling for the execution of gays at religious political conference featuring failed presidential candidates Ted Cruz, Mike Huckabee and Bobby Jindal? He’s found a new target: Katy Perry’s parents and Christian pastors like them.

They “need to resign as a pastor,” said Kevin Swanson of Colorado. But even that is not enough, he declared on the radio, suggesting the proper response to your child coming out “is sackcloth and ashes, tearing of the clothes, crying out to God for mercy” and repenting “that there is something terribly wrong with our family” and “that there is something terribly wrong in me.”

Having a gay child, Swanson told his radio listeners last month, is a sign that “there may be something very, very wrong with the pastor himself.” According to Right Wing Watch, Swanson said he was shocked that “a man who thinks there is a possibility his kids could come out gay [would not] then not turn to himself and see there to be something of a problem with himself.”

Perry talked about being sexually fluid in a speech to the Human Rights Campaign last month. She revealed that as a child she did more than just “kiss a girl,” and that she attended “pray away the gay” camps.

Her parents, Keith and Mary Hudson, made headlines last summer when they confirmed they support her even though she no longer considers herself Christian.

“Don’t judge her, pray for her,” her father reportedly asked of congregants at Church of Grace in Yorba Linda, California.

But to Swanson, even being related to a queer person is equal to sin.

“As a pastor, if your children turn out to be sinners,” he told listeners of his “Generations” broadcast, “if it turns out they abandoned the faith while they are in the household, accused of riot and unruly debauchery, et cetera, within the household, you need to resign as a pastor.”

Is Pat McCrory about to face a federal voter fraud investigation?