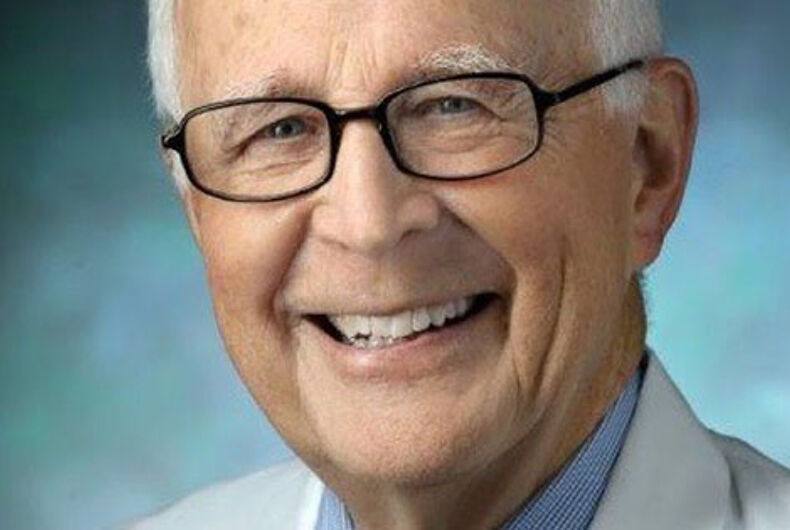 Almost a month after penalizing Johns Hopkins Hospital for its refusal to disavow Dr. Paul McHugh — the notorious anti-transgender advocate and religious right’s gun-for-hire — Human Rights Campaign leaders have taken a new step to discredit him and his bogus anti-LGBTQ “research.”

HRC has launched a new website, McHugh Exposed, with the mission of “pulling back the curtain” on what the organization calls his “dangerous faux-scientific writings being peddled as the basis for attacks on anti-LGBTQ people.”

“Paul McHugh’s writings continue to dangerously undermine the safety, security and wellbeing of LGBTQ people, and particularly transgender youth, across the country,” said Mary Beth Maxwell, HRC Vice President for Research, Training, and Programs, in a statement emailed to LGBTQ Nation. “McHugh’s junk science is still being referenced in legislative and legal battles despite the fact that Paul McHugh has no academic expertise in either gender or sexual orientation, and actively avoids publishing any of his anti-LGBTQ pieces in peer-reviewed journals. Policy makers, informed citizens and parents deserve to know that this is junk science and personal opinion – not at all in the mainstream of current medical and academic research and not endorsed by Johns Hopkins regardless of how McHugh uses his title to suggest credibility or expertise.”

McHugh’s continued association with Johns Hopkins cost its hospital 25-points on HRC’s Health Equality Index for 2017, a barometer of how supportive medical institutions across the country are when it comes to the LGBTQ community. It was the first time in the decade-long history of the rankings that any medical facility was docked points for its performance in the new category of “Responsible Citizenship.”

The demerits left JH with a final score of 40, about half of what most institutions were awarded.

McHugh was squarely blamed for the poor showing, just months after the world-famous hospital announced it would resume offering gender affirmation surgery for the first time in 40 years. But as HRC noted in its online explanation for the demerits, his work and association with JH raised valid concerns, given Johns Hopkins’ checkered history.

“There are LGBTQ patients who either are going to Hopkins or want to go to Hopkins, who are fearful that the care they will receive is either substandard or subpar,” said Sarah McBride, HRC National Press Secretary, in a telephone interview with LGBTQ Nation.

“Over the last year or so, we have seen an increase in the myths and the junk science peddled by Paul McHugh. We’ve seen increasingly Johns Hopkins’ name being utilized to back up the essays written by McHugh,” McBride said. “And we are seeing very clearly, particularly in the last year or two, in court cases and in legislatures, the harm that that’s having.

McHugh is the professor of psychiatry, former chief psychiatrist at Johns Hopkins Hospital, and to this day a member of the faculty at Johns Hopkins School of Medicine. As advocate Brynn Tannehill described him, McHugh has misused his position “to distort science and spread transphobic misinformation.” McHugh is a gun-for-hire for anti-equality activists that have been labeled extremist hate groups by the Southern Poverty Law Center.

Among the words Dr. McHugh has used to describe transgender people over the years: “counterfeits,” “impersonators,” “confused” and “mad.”

HRC’s website includes a detailed timeline of what HRC claims is the impact of McHugh’s hateful and damaging essays, and how they have been used to target and attack LGBTQ people, as well as a new video featuring Dr. Tonia Poteat, an expert in LGBTQ health.

Caitlyn Jenner’s way of protesting Trump: ‘I won’t be playing golf with him’