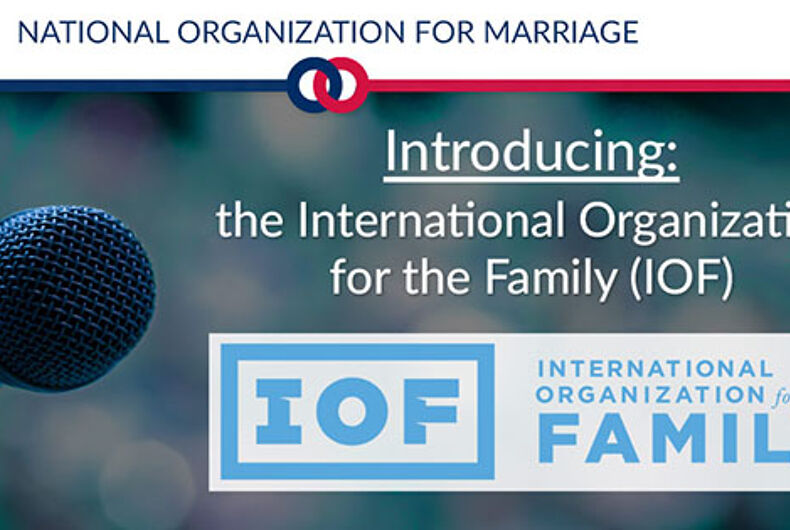 For its first act, Brown traveled to Cape Town, South Africa where he introduced something called the Cape Town Declaration.

The declaration, as reported by the racist far right wing propaganda machine that is Breitbart News, is “pro-family” and “defies LGBT culture,” with signatories that include “hundreds of religious, political, social, and civic leaders from all the continents.” PinkNews reports they include conservative religious movements in Africa, as well as support in Russia, Australia and central Europe.

And according to PinkNews, the IOF will fight LGBT! rights “on a range of issues, and may even oppose reforms to repeal archaic sodomy laws.”

“We affirm the dignity of marriage as the conjugal bond of man and woman. We embrace it not as the parochial practice of any sect or nation or age, but as the patrimony of all mankind. We defend it not as a matter of preference or temperament or taste but as the heart of any just social order.”

Not only does the IOF’s declaration rule out same-sex marriage, it carries a warning to LGBTQ-friendly corporations and reinforces a homophobic message from Pope Francis:

“A thriving culture will therefore serve marriage—and all society—by promoting purity outside it and fidelity within; by discouraging pornography, adultery and divorce; and by firmly resisting every push to redefine marriage: to include same-sex or group bonds, or sexually open or temporary ones.

We rededicate ourselves to honoring, restoring, and protecting these truths. We commit, where possible, to refuse to deal with corporations that deny them. We pledge to resist the rising cultural imperialism of Western powers whose governments seek nothing less than the ideological colonization of the family.”

“Forcing the agenda of same-sex ‘marriage’ on nations by manipulation of foreign aid or the like is a deplorable practice,” reported Breitbart, quoting Brown.