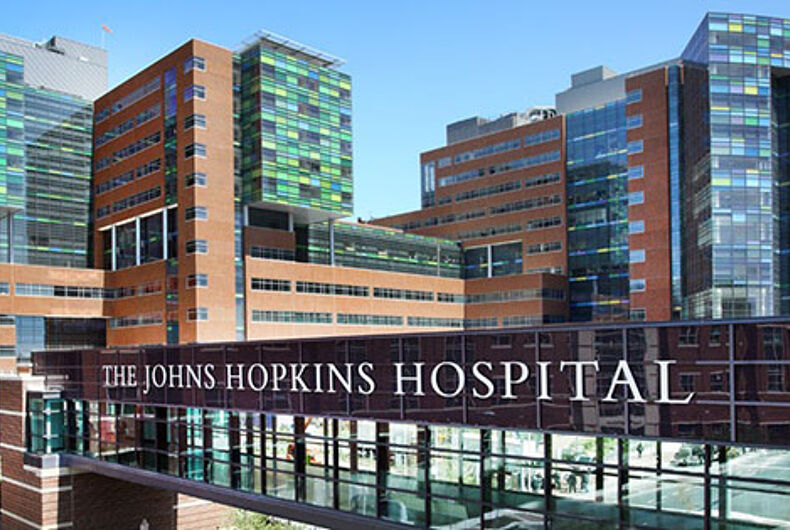 For the first time in the decade-long history of the Healthcare Equality Index, published annually by Human Rights Campaign, Johns Hopkins Hospital’s controversial reputation for transgender care has cost it valuable points in the highly-regarded national survey of more than 1,600 medical facilities serving America’s LGBTQ community.

The deduction of 25 points out of a potential 100, according to HRC, was for its poor showing in the new category of “Responsible Citizenship,” and left Johns Hopkins Hospital with a final score of 40, about half of what most institutions were awarded.

This might surprise some of those who read in LGBTQ Nation last October that the world-famous hospital would resume offering gender affirmation surgery for the first time in 40 years. But as HRC noted in its online explanation for the demerits, concern is warranted, given Johns Hopkins’ checkered history.

“There are LGBTQ patients who either are going to Hopkins or want to go to Hopkins, who are fearful that the care they will receive is either substandard or subpar,” said Sarah McBride, HRC National Press Secretary, in a telephone interview with LGBTQ Nation.

“Over the last year or so, we have seen an increase in the myths and the junk science peddled by Paul McHugh. We’ve seen increasingly Johns Hopkins’ name being utilized to back up the essays written by McHugh,” McBride said. “And we are seeing very clearly, particularly in the last year or two, in court cases and in legislatures, the harm that that’s having.

She’s referring to Dr. Paul McHugh, professor of psychiatry, former chief psychiatrist at Johns Hopkins Hospital, and to this day a member of the faculty at Johns Hopkins School of Medicine. As advocate Brynn Tannehill described him, McHugh has misused his position “to distort science and spread transphobic misinformation.” McHugh is a gun-for-hire for anti-equality activists that have been labeled extremist hate groups by the Southern Poverty Law Center.

Among the words Dr. McHugh has used to describe transgender people over the years: “counterfeits,” “impersonators,” “confused” and “mad.”

As Tannehill has extensively written, what makes McHugh dangerous is not just his so-called “expert” testimony and frequent citations in rightwing anti-trans propaganda, but how his conclusions influence others in a position of authority. In a 2016 “position statement” issued by an official-sounding but bogus pediatrics group calling transgender treatment child abuse, McHugh “distorts the facts” with “omissions, half-truths, outdated research, and motivated entirely by religious based bias against a group of people already heavily stigmatized by society,” according to Tannehill. “The fact that every last one of his points can be disproven by anyone with access to Google discredits the academic standards of the institution.”

“I’m also already hearing from parents of transgender children that relatives and people hostile to them in the community are using this position statement to threaten to report them to child protective services and take their children away.”

Ellen goes to the dogs (and cats) with Oprah