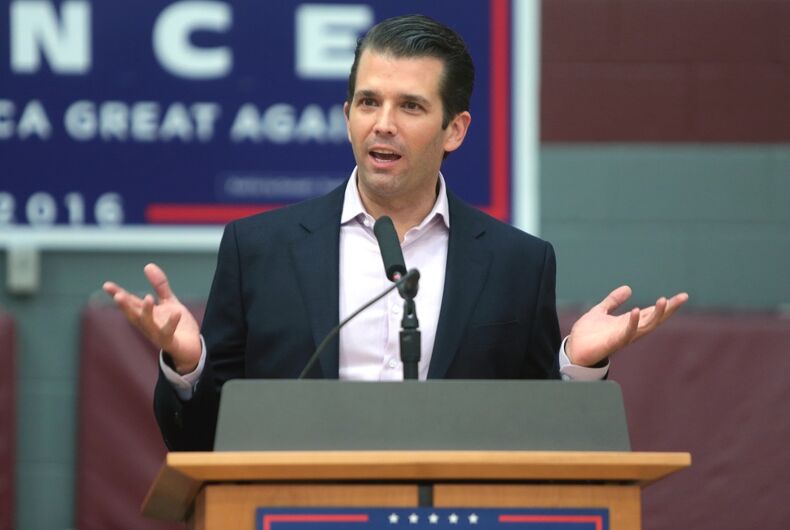 Donald Trump Jr. took to Twitter to condemn LGBTQ students trying to prevent a Chick-Fil-A from opening on their campus.

In a tweet linking a story to the conservative Daily Caller, Trump Jr. wrote, “Luckily these students wont likely have to tackle issues more stressful than a yummy chicken sandwich in their lives… Oh Wait #triggered.”

Luckily these students wont likely have to tackle issues more stressful than a yummy chicken sandwich in their lives… Oh Wait #triggered https://t.co/NRLtsHBSLn

Actor, LGBTQ advocate and social media maven George Takei was among those who responded on Twitter.

Donald Jr. mocking LGBTs for not having to tackle stress? He'd stick his whole damn foot in his mouth if there wasn't a silver spoon there. https://t.co/Nbct9S9MeO

Like his father, Trump Jr. consumes massive amounts of rightwing media and posts about it constantly on Twitter. Unlike his father, he’s fluent in alt-right slang, using terms like “cuck” and “snowflake” less than sparingly.

The hashtag #triggered is used on Twitter generally for two purposes: mocking women and minorities for expressing contempt at those who seek to marginalize them and posting racist and misogynist memes.

In this case, Trump Jr. was triggered by a story that doesn’t affect him at all: a college’s student government agreed to hear a resolution to vet a Chick-Fil-A restaurant on campus.

In 2012 Chick-Fil-A came under fire as president Dan Cathy said the company was “guilty as charged” of accusations that it donated part of its profits to anti-LGBTQ hate groups, including Exodus International and the Family Research Council. Since then, the company has publicized policy changes to distance itself from the topic of same-sex marriage, and officials promised it would treat any person equally regardless of their beliefs.

“Chick-fil-A has a questionable history on civil rights and human rights,” Martini told Duquesne’s newspaper The Duke. “I think it’s imperative the university chooses to do business with organizations that coincide with the [university’s] mission and expectations they give students regarding diversity and inclusion.”