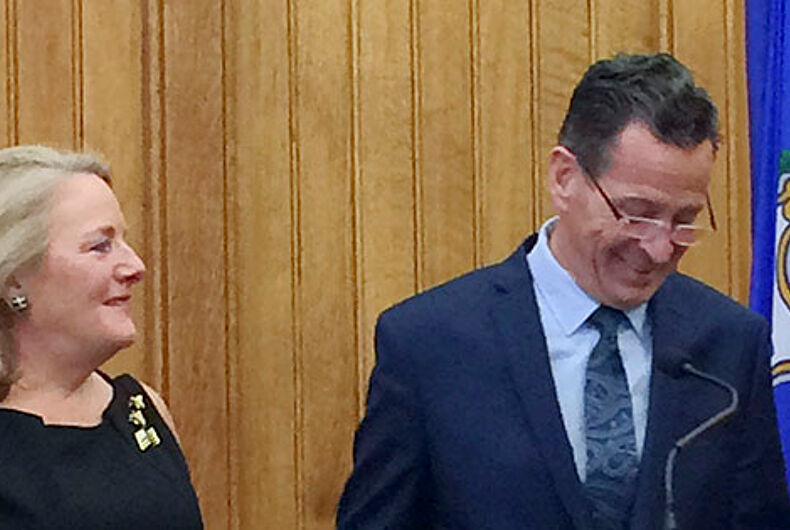 Connecticut Gov. Dannel P. Malloy holds the hand of his wife Cathy after announcing Thursday, April 13, 2017, at the Capitol in Hartford, Conn., that he will not seek a third term in 2018.Photo: AP Photo/Susan Haigh

The 61-year-old Democrat appeared with his wife, Cathy, and the couple’s eldest son, Dannel, at an unexpected state Capitol news conference.

He denied his decision has anything to do with low public approval ratings, saying he and his family have been in politics for years and decided they’re “ready for another stage” in their lives.

“I’ve run for governor three times,” said Malloy, who won two of those races after serving 14 years as mayor of Stamford. “I just think that’s enough for me personally and for Cathy. We’ve put in our time and I’ve devoted six full years to trying to turn this state around.”

Malloy, who is also chairman of the Democratic Governors Association, said he will finish out his second term as governor, which ends in January 2019. A list of Republicans and Democrats interested in the seat has been growing in recent months.

Much of Malloy’s tenure has been marked by fiscal struggles, due in large part to Connecticut’s slow recovery from the economic recession of the late 2000s. He’s signed budgets that included the state’s two largest tax increases, large-scale government layoffs and spending cuts to popular programs.

Malloy has yet to reach an agreement with the General Assembly on a new budget that will cover a projected $1.7 billion deficit in the fiscal year that begins July 1. The state’s main spending account is typically about $18 billion.

Immediately after Malloy’s announcement, the Republican Governors Association said his “toxic legacy” of “destructive anti-jobs, high-tax policies,” coupled with his decision not to seek re-election, had created a “top pick-up opportunity” for the GOP in 2018.

Malloy said Thursday he’s proud of his record but understands not everyone recognizes his administration’s accomplishments since he took office in 2011.

“Throughout our work, we’ve tried to play the long game for Connecticut, not doing what is politically expedient, but rather what we believe is in the best interests of the people we serve today, and for generations still to come,” he said.

Malloy touted his efforts to improve private sector job growth and high school graduation rates, as well as make “commonsense and compassionate changes” to the state’s criminal justice system, such as giving nonviolent criminals more opportunities to get drug treatment and successfully reintegrate into society.

Last year, he was awarded the John F. Kennedy Profile in Courage for supporting resettlement of Syrian refugees after the Paris attacks. Malloy personally welcomed to Connecticut a family that had fled Syria in 2011 and planned to resettle in Indiana. The couple and their 5-year-old son were turned away when Pence, now the Republican vice president, ordered state agencies to halt resettlement activities.

“What I have always stood for is a more inclusive society where people recognize their obligations to one another,” Malloy said, after learning he was last year’s recipient of the award.

Following the Dec. 14, 2012, mass shooting at Sandy Hook Elementary School, Malloy signed sweeping new restrictions on weapons and ammunition magazines similar to the ones used by the man who fatally shot 20 children and six educators.

Malloy later joined former President Barack Obama in pushing for stronger background checks and other measures on the federal level, eventually chastising the U.S. Senate for failing to pass the legislation, saying the “members who voted against this proposal should be ashamed of themselves.”