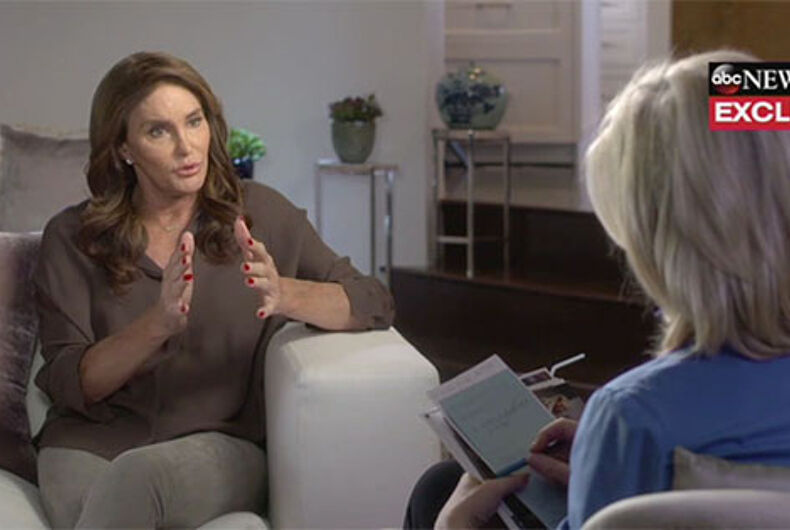 Caitlyn Jenner will be back in prime time Friday night in another exclusive sit down interview with Diane Sawyer, conducted in her luxurious mansion high atop the mountains that rise above Malibu.

The last time the transgender former Olympian sat down with ABC’s star anchor, she was still using male pronouns and hadn’t yet revealed to the world what name she would adopt as her own, other than “Bruce.” But given that her “coming out” interview was such a ratings goldmine, it’s no surprise that Jenner and the network have gone back to that well two years later.

During the one-hour interview Jenner and Sawyer cover transgender rights, same sex marriage and her support for President Donald Trump.

So how does she plan to do that? The Kardashian co-matriarch reveals her preferred form of protest in response to a question about her conversations with the president, which so far have been a total of one.

“When I was at the inauguration I did say ‘hi’ at a cocktail party, and he wanted me to play golf with him,” she revealed. “At the time I thought it was a pretty good idea, but since Title IX, it’s not a good idea, and so I won’t be playing golf with him.”

In a preview clip provided by ABC News, Jenner responds strongly to a direct question from Sawyer on an issue that has dogged her for nearly all of those two years since announcing to the world she’s trans: her position on marriage equality.

“How do you really feel about gay marriage?” Sawyer asks, using a colloquial term commonly used by heterosexuals that reveals more about the network anchor’s perspectives than anything else; after all, it’s been almost 2 years since the Supreme Court ruled that same-sex marriage is as valid and legal as straight couples getting married, so maybe we can just agree to call it “marriage” now?

“I am 100 percent behind gay marriage. Let’s clear that up right now,” Jenner declares, referring to the controversy that made headlines after she appeared on Ellen DeGeneres’s talk show in 2015. All of this is covered in her new memoir, The Secrets of My Life, already a bestseller even before it hits bookstores.

And if it seems like a coincidence that the memoir will be published next week just days after Jenner’s blockbuster interview sequel with Sawyer, it’s not. Especially since it was one of the “big stories” covered by Good Morning America Friday morning.