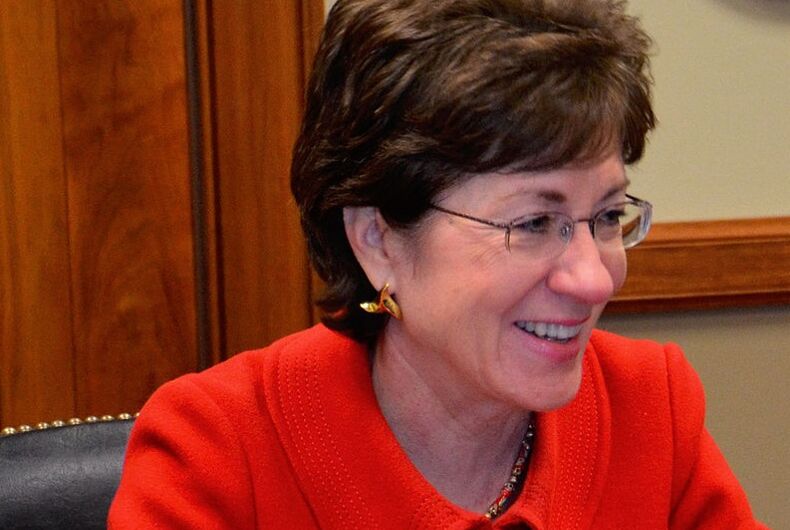 Senator Sue Collins was the only Republican to sign the letter. Photo:

19 Senators sent a letter to the Department of Health and Human Services (HHS) to urge them to collect data on LGBTQ people.

In March, the draft copy of the National Survey of Older Americans Act Participants was changed to remove a simple question asking if survey participants identify as gay, lesbian, bisexual, or heterosexual. The survey is meant to find out who benefits from the Older Americans Act, which provides funding for elder care and support for caregivers.

A draft copy of the Annual Program Performance Report for Centers for Independent Living survey was also released in March, and it removed a question about sexual orientation and the option to choose “transgender” on the question about gender. The survey is used to measure the effectiveness of services for people with disabilities.

In both cases, the only changes made to each draft survey was to remove references to LGBTQ people.

The letter, written by Susan Collins (R-Maine) and Bob Casey (D-Pennsylvania), stresses the importance of these questions when it comes to ensuring that people have access to these government services.

“Sexual orientation and gender identity questions on these surveys were designed to ensure that vital services were reaching vulnerable LGBT Americans,” the Senators wrote. “By rolling back data collection, it is possible that the needs of millions of Americans will go unmet.”

The letter also says the Senators are “troubled” by how the HHS declared “no changes” to the first survey, when that was not the case.

The Senators want the questions to be restored and a briefing on why they were removed in the first place.

The only Republican Senator to sign the letter was Susan Collins. The other signatories include openly lesbian Senator Tammy Baldwin and possible 2020 presidential contender Kirsten Gillibrand, as well as leftwing firebrands Bernie Sanders, Elizabeth Warren, and Al Franken.

In a separate incident, a study of LGBTQ youth homelessness by the Department of Housing and Urban Development planned during the Obama Administration appears to have been canceled.

What was Caitlyn Jenner doing at the White House?