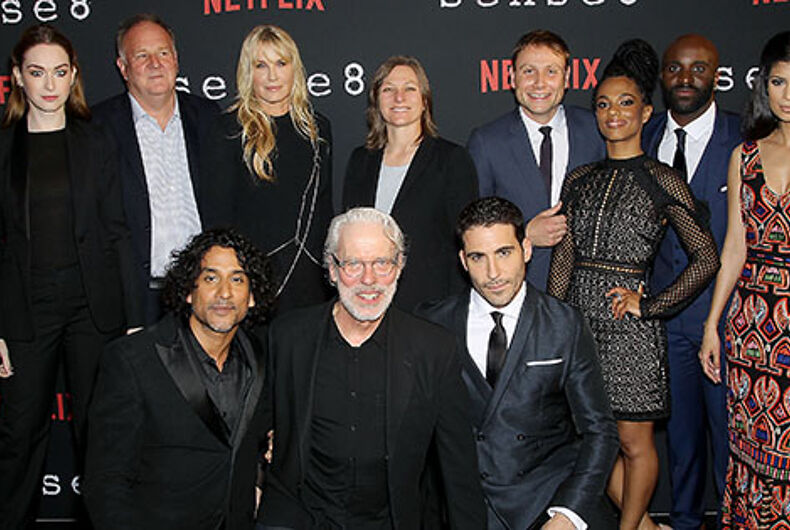 Many of the stars of the hit Netflix series Sense8 attending the second season premiere at a New York City theater Wednesday night talked passionately about how their show reaffirms their own personal beliefs in gender identity, marriage equality and the freedom to live and be loved.

“I just wanted to be part of the manifesto against fascism,” said Naveen Andrews, who plays the key character of Jonas. Andrews, whose claim to fame on American TV prior to Sense8 was another cult favorite series, Lost, spoke to LGBTQ Nation on the red carpet during a live stream on Facebook that is now edited together as a YouTube video.

Although President Donald Trump was not once mentioned by name, several stars acknowledged their collected work comes at a critical time for not only America but the world, when our very right to exist is threatened. So it is with the actors who come from many other scifi series from Lost to Stargate Universe to Doctor Who.

“The timing of this season is particularly poignant,” said Tina Desai, who plays Kala. Her character is a brilliant pharmacist in an arranged, loveless marriage in Mumbai. She echoed the comment by her costars that down deep, despite our differences, “we’re all the same.”

The series is the brainchild of the Wachowski sisters, Lana and Lilly, perhaps most famous as the makers of The Matrix films, and co-created by J. Michael Straczynski, who dreamed-up Babylon 5. Filmed for months at a time in locales around the world, the show explores the lives of eight ordinary people from the far corners of the earth who discover they not only share a birthday but a telepathic hyperkinetic bond that allows them to interact in the physical world simply by using their minds.

Why did Aaron Hernandez write John 3:16 on his face before committing suicide?