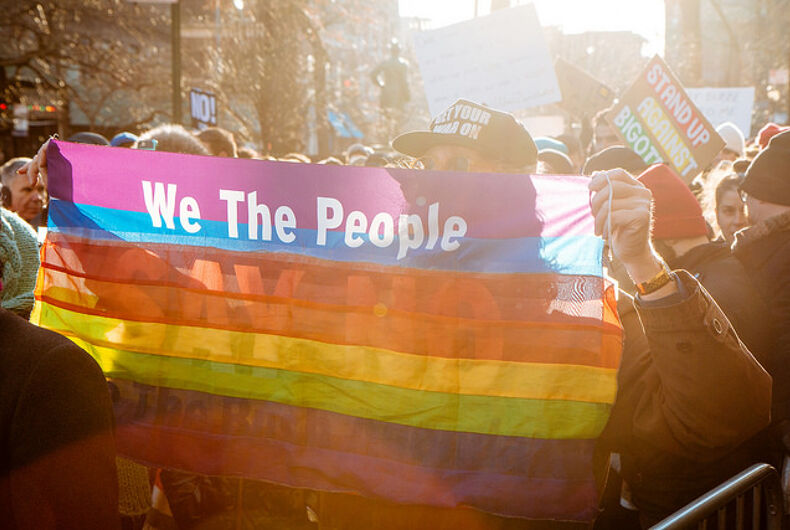 Combined with the withdrawal of another planned survey evaluating the effectiveness of a homelessness project for lesbian, gay, bisexual and transgender youth, the moves have alarmed watchdogs who worry they may point to a manipulation of government data collection to serve the ideology of a government they view as hostile to their causes.

“In an age when LGBT rights are such a part of the national discussion, the Trump administration is choosing to not only ignore us but erase us from the discussion,” said Laura Durso, vice president of the LGBT Research and Communications Project at the Center for American Progress, a nonprofit liberal advocacy group. She worried officials might be rolling back such data collection elsewhere.

Each year, a survey done by the Department of Health and Human Services gathers data from those receiving transportation, homemaker and meal services, visiting senior centers, or taking part in other programs funded by the Older Americans Act. A draft of this year’s National Survey of Older Americans Act Participants, released this month, removes a single query asking whether a respondent is gay, lesbian, bisexual or heterosexual from a battery of demographic questions. It is the only change made so far to this year’s annual survey.

READ MORE: Is the Trump administration erasing our elders by refusing to count them?

A second HHS-sponsored survey, the Annual Program Performance Report for Centers for Independent Living, gathers feedback on counseling, skills training and other services provided to the disabled. A revised draft posted four days after President Donald Trump’s inauguration included a question on sexual orientation, but the survey was subsequently edited, with the deletion of the sexuality question the only apparent notable change.

Kelly Mack, a spokeswoman for the Administration for Community Living, the HHS division which oversees the two surveys, said Monday the orientation question was included in past surveys as part of a pilot test, but that the sample size was insufficient to be reliable. Advocates reject that explanation, saying the data has already provided some insight into LGBTQ elders.

A draft of the Older Americans Act survey included no other question changes. After Mack said Friday that the orientation question was one of several being eliminated, The Associated Press asked her to identify the other questions. She responded Monday saying a portion of a question on survey respondents’ date of birth was being cut, though the survey draft still included that query.

The LGBTQ question was introduced on the survey in 2014, a move heralded by gay rights groups because of the dearth of federally-collected data of their communities and the potential to validate programs or identify areas where services may be inadequate.

An administration official said Trump political appointees at the agency reviewed the OAA survey but targeted only LGBTQ questions. The official spoke on condition of anonymity because he is not authorized to comment on behalf of the agency.

“I view this as a policy change, not the end of a pilot,” said Kathy Greenlee, who was HHS’ assistant secretary for aging under President Barack Obama and led efforts to increase data collection on LGBTQ people. Greenlee, now with the Center for Practical Bioethics, said though all survey questions are approved for three years at a time, the addition of the LGBTQ question was never envisioned as a temporary entry.

Separately, a survey planned by the Department of Housing and Urban Development on an LGBTQ homelessness project was withdrawn, according to a notice in the Federal Register. The Obama administration had planned interviews, surveys and focus groups to determine the efficacy of the program, but the information-gathering had not yet begun.

A HUD spokesman, Brian Sullivan, did not respond to questions Monday about the withdrawal.

Michael Adams, CEO of Services and Advocacy for Gay, Lesbian, Bisexual and Transgender Elders, or SAGE, said halting the data collection had the potential to affect not just federal funding and programming, but those at the state and local level that take their cues from Washington.

“It’s a big deal to make this change,” Adams said. “What this is about is stripping out an entire population.”

Accepting the Republican nomination last summer, Trump said he would “do everything in my power to protect LGBTQ citizens” and after taking office, he pledged to maintain Obama administration job protections for LGBTQ federal employees. But his administration stepped back from Obama’s position allowing transgender students to use bathrooms and locker rooms corresponding to their gender identity, and LGBTQ advocates have said they’re troubled by cabinet appointees, including HHS Secretary Tom Price, whom they regard as virulently anti-gay.

David Stacy, head of policy for the Human Rights Campaign, said the survey moves fit a pattern from an administration that has shown an aversion to facts: “If you deny the problem exists by not having the data, it certainly makes it easier to pursue the policy you prefer without regards to reality.”

Majority of millennials see Trump as an illegitimate president