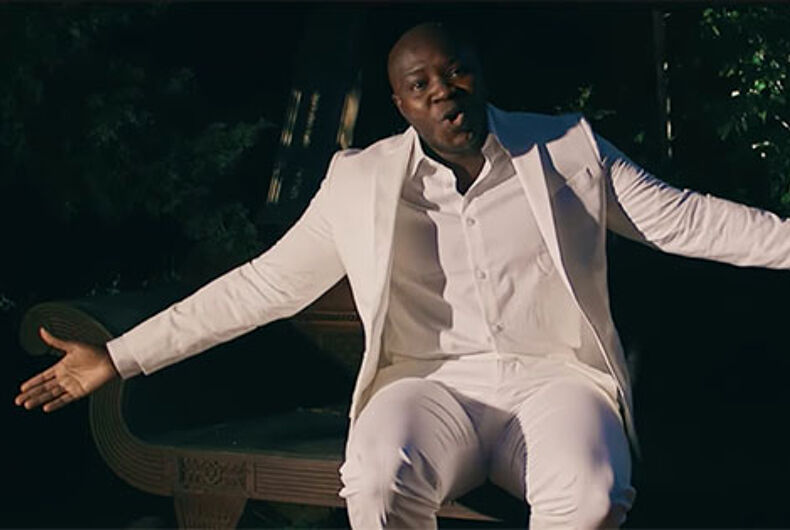 He’s been profiled in Ebony, survived conversion therapy, and earned a Ph.D., but now actor and activist Rizi Xavier Timane is sharing his biggest project since acknowledging the hard road he is on as a black man in America. And just to make it harder, he also happens to be an immigrant from Nigeria, and transgender, too.

The project is a music video with an inspiring message that he said in an email is a response to the “divisive administration” of Donald Trump.

As an immigrant and LGBT person, I’m deeply impacted by Trump. Honesty is a key issue with this President. Bullying and distractions are taking our eyes off of what is happening.
The president has, through his policies on trans rights, planned parenthood (hence women’s rights), immigrant rights and the Muslim ban, alienated almost every demographic in the country other than white male Americans and more love for our neighbors as we love ourselves is needed.

And so Rizi created “Love Is All We Need,” featuring a variety of people from different faiths, ethnicities and genders. In the months since its release, it has gone viral on YouTube with more than 1 million views.

According to his website, he knew as young as 8 that he was transgender, and as a result was subjected to harsh religious persecution by his fundamentalist parents in Lagos, who tried to “pray away the trans.” He now lives in Los Angeles and counsels transgender youth in addition to being an actor and singer.

Rizi told Ebony that even though he feels much of his struggle as a transgender individual is behind him, he has found new struggles living in America.

Whenever I leave my house now, my wife reminds me to keep both hands on the steering wheel if a cop pulls me over, so he doesn’t think I’m reaching for a gun. While I don’t dismiss the tragic cases of police violence against Black women, it’s not lost on me that she didn’t say this when I presented as a woman.

As a Black man, my journey has just begun. This is not exactly the life I signed up for. Not that I thought living as a man would be one nonstop party, but I guess we don’t realize how serious a situation can be until we live through it. Still, I’m grateful; despite the trials of being a Black male in America, I am finally comfortable in my skin, and that alone brings me a sense of personal power.