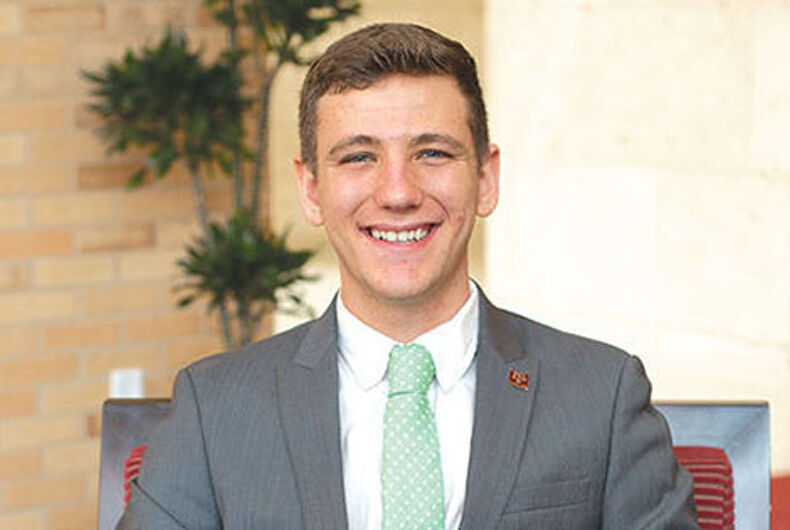 Bobby Brooks is a junior at Texas A&M University, and starting April 1 he is also student body president. What makes that special is he is also openly gay, unlike every single one of his 73 predecessors.

Just being out at the notoriously antigay university is a challenge unto itself, with the Princeton Review placing Texas A&M at the bottom of its rankings for being one of the 20 least LGBTQ-friendly schools in the nation. Last fall was the first time since 2011 the university didn’t make that ignoble list. But Brooks, as executive vice president of the campus diversity group, wasn’t going to let that stop him.

“I was an Aggie from the first day that I was born, there was no choice about it,” Brooks told The Battalion student newspaper, using the students’ nickname for those who attend the university. “My sexuality was a non-issue in terms of selecting Texas A&M as a university because I knew what this university could offer.”

Texas A&M — which once stood for agriculture and manufacturing — was founded in 1876, and has a history of intolerance on campus that goes back at least that far.

His sexual orientation became an issue during the campus election campaign, according to the Dallas News and Houston Chronicle. It ended amid accusations aimed at his opponent of campaign fraud and intimidation. Those charges ultimately led to disqualification, and Brooks — who finished second — instead won the coveted post.

And in a Facebook post, showing him surrounded by friends and supporters, Brooks addressed those who tried to defeat him:

To those of you who spoke poorly about me based upon my sexual orientation or personal religion (and talk gets around, my friends), I forgive you. I really do. To those of you who would make secret deals and meetings about our campus and our students, I implore you to not be lost in pride and to remember who it is that we are here to serve.

“If I sell my identity short, I’m selling the identities short of every single person on this campus who doesn’t have the opportunity to run for student body president,” Brooks said.

Brooks revealed he struggled for many years with his wish to come out but fear doing so would isolate him. After high school, he explored his sexuality in Paris, “without the pressures he felt in Texas,” the student paper reported.

“I had a strong history of suppression with my own feelings toward that,” said Brooks. “I had known for a very long time but I didn’t want to accept that and thought it would just get better.”

Finally, upon enrolling in College Station, he said he came out to a trusted friend who was French, telling her “Je suis gay.” From there he found acceptance from his parents and friends and eventually many fellow students.

His new task, starting the first of next month, is to guide 60,438 students in their everyday needs and challenges.

“I want every single student to feel that they are welcome here and their contributions are welcome,” Brooks told The Battalion.