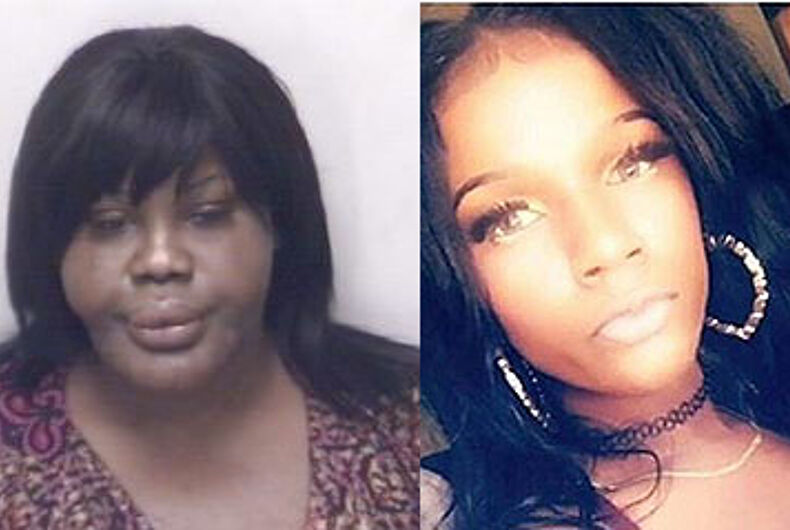 A transgender woman accused of practicing plastic surgery without a medical license is under arrest in North Carolina, and awaiting a hearing on charges of second degree murder in the January death of 19-year-old Symone Jones.

Police say Kavonceya Iman Cornelius, 42, performed an unlicensed plastic surgery procedure that led to the death of the transgender teen. The Charlotte Observer and other local news media, which misgendered the victim and “deadnamed” both Jones and the suspect, reported the procedure as silicone buttocks injections.

Too often performed outside of a licensed medical facility by a non-licensed medical professional, this illegal procedure is the work of what the community calls “pumpers.” As The New York Times reported in 2011, this is a dangerous, sometimes fatal but significantly less expensive operation utilizing loose silicone, which can migrate, cause disfigurement, significant scarring, and potentially fatal health complications.

Following multiple injections at a Charlotte hotel on Jan. 5th, reports say Jones returned to her home in Fayetteville. Two days later, her mother told WTVD she was barely breathing and was admitted to a hospital. Jones died there, one week after the procedure, on Jan. 12th.

According to the GoFundMe page set up to help her family pay funeral expenses, the injection “cut her lungs and caused internal bleeding” and “poisoned her bloodstream.”

WTVD reported Jones started her transition in 2016, and had seen a licensed doctor in Miami for breast augmentation surgery. Her family told the station she began reaching out to what they called a “concierge service,” working on behalf of what Jones believed to be a licensed medical facility in Charlotte.

Following Jones’ death, her family hired a private investigator to work with police to find who had injected the silicone. Police got a tip from another patient who had become ill after receiving silicone injections from Cornelius, reported the Observer. “As a result, the victim now has very serious health problems,” police said in a statement. The unnamed patient lives outside North Carolina.

During the investigation, police say they learned Cornelius had been conducting these illegal medical procedures with non-medical grade silicone.

Cornelius is being held in the Rowan County Detention Center under no bond pending her first court appearance on Wednesday.

As for the danger posed by these pumpers, The Times further reported:

Although a number of pumpers say they have been trained as nurses, most have no medical training and are not licensed to perform surgical procedures, said Dr. Paul R. Weiss, a plastic surgeon and professor at the Albert Einstein College of Medicine of Yeshiva University. They often operate in rooms that are not sterile, increasing the risk of infection, Dr. Weiss said.

If silicone is injected into the bloodstream in error, it can cause a laundry list of serious medical problems, including acute respiratory distress, severe autoimmune or connective tissue disorders, pulmonary embolism or death, Dr. Radix said. Because of the underground nature of pumping, it is impossible to know exactly how many women have died from it, though deaths have been reported across the country.

Readers can learn more about the dangers, complications and risks at the TS Road Map website, and be warned: a photograph on the site showing exactly what one victim experienced is not for the squeamish.

Study finds discrimination against people with a ‘gay voice’