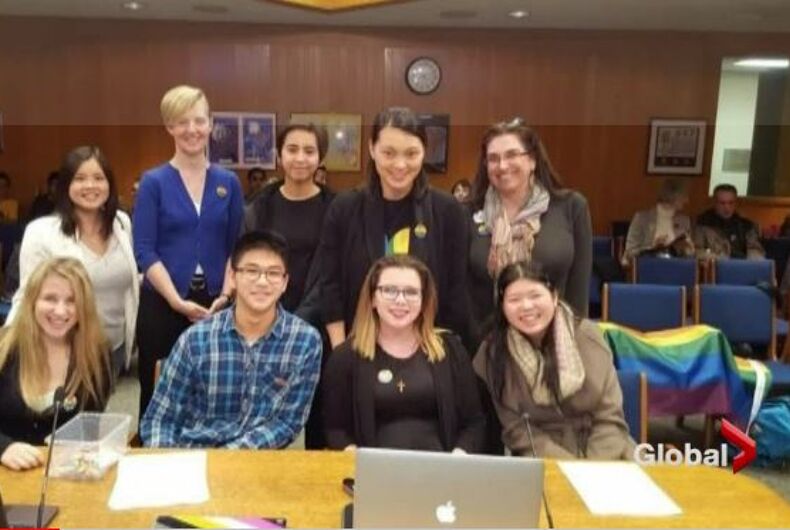 The Richmond School District, in British Columbia, is considering a policy change to protect LGBTQ students from discrimination, drawing the upset of a parents’ group.

At least one parents from the group told Global News that she worries straight children could be converted into a homosexual “lifestyle,” demonstrating the type of ignorance that still exists in society, providing the need for such protections.

“It is possible. If it’s a life choice, it is possible,” Colleen Howu, a member of the Parents Care group said, ignoring all relevant science on the subject.

Nathan Lee and Kaylyn Munro petitioned the district to draft a policy offering protections to LGBTQ students, and both said that while they received support from many during their time at Richmond’s Steveston-London Secondary School, they also faced discrimination.

“I cried almost for an hour I was so upset,” said Lee, a senior and the current president of the club.

As for the suggestion that his sexual orientation is a “lifestyle choice,” he rightly said that is not the case.

“I’m gay and if it really worked that way I would choose to be straight then I wouldn’t have so [many] challenges,” he confessed.

“We’re not trying to single each other out, or put one group above the other. We’re simply trying to level the playing field,” said Munro.

The district had been relying on the B.C. Human Rights Code to address discrimination, which protects students on the grounds of sexual orientation and gender identity and expression, although the latter was only added this past July.

Representatives from the Rainbow Club asked the Richmond Board of Education back in November to write an anti-discrimination policy that specifically protects and acknowledges the rights of LGBTQ students, reports Richmond News.

They voted unanimously in favor of crafting such a policy, becoming one of the last districts to do so in B.C.

Parents Care group started an online petition citing concern over any such policy being enacted and asking that they be more directly involved. Eventually a group consisting of students, parents and educators will be formed to draft the policy.

While the petition has managed to pick up over 6,000 signatures, some question its legitimacy.

“It included names from Hong Kong, the United States and other countries,” noted Richmond School Board Chair Debbie Tablotney.

Lee said he doesn’t blame the parent group for their opposition.

“I think it’s maybe just a lack of education or maybe miseducation,” he graciously said.