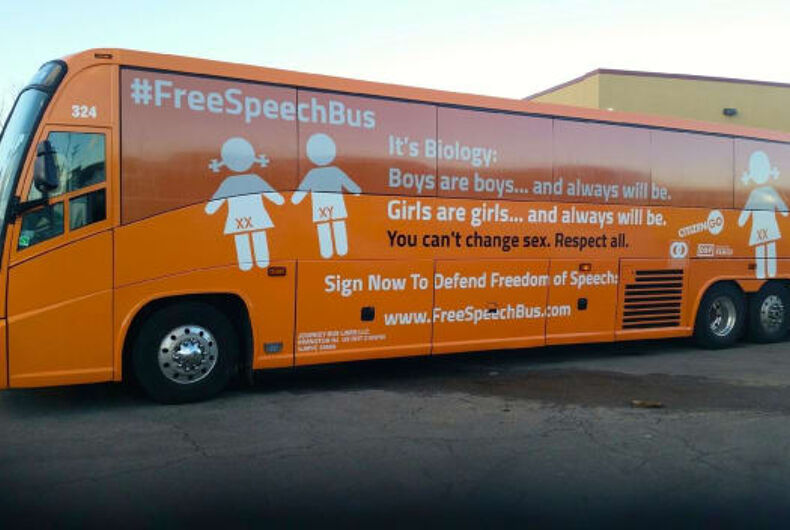 After getting taken off the road in Madrid due to an advertising ordinance violation, the creators of the transphobic bus are bringing it to Manhattan.

A group called CitizenGo, headquartered in Spain, is working with the National Organization for Marriage (NOM) to bring an English version of the bus to New York City.

The bus has a message similar to the one in Madrid. It reads:

Do not be fooled.

If you are born a man, you are a man.

If you are a woman, you will stay that way.

The bus is to be parked outside the United Nations headquarters, since the UN is considering a sex education resolution. Afterwards, the bus will be driven through major cities to “unleash a silent majority” of people opposed to equal rights for transgender people. Considering how at least eight transgender people have been murdered in 2017 already, this group of people doesn’t seem in any way silent.

The organizers are calling this the “Free Speech Bus,” even though its message doesn’t have anything to do with freedom of speech. Instead, the name reminds me of a 5-year-old putting a finger one inch away from their sibling’s face while shouting “Not touching you!” over and over again.

Also, the “Respect all” at the end of the message makes no sense in isolation considering it immediately follows a statement about what someone who is not the speaker can’t do. “We need a discussion about how to respect everyone,” a NOM spokesperson told Buzzfeed.

The message is confusing because NOM isn’t using the normal definition of the word “respect,” which would preclude telling other people how to identify. Instead, NOM is talking about “conservative respect,” which refers to showing deference people who deserve it. By virtue of receiving that deference, those people in turn cannot be criticized when they’re behaving badly.

Respect is about finding ways for everyone to live peacefully together, but conservative respect is about reinforcing the power one group of people has over another.

The focus on respect is also the right’s normal tactic of turning arguments around to portray themselves as the constant victim. But even NOM couldn’t keep up with their “We’re the side that’s actually in favor of tolerance” rhetoric. A NOM spokesperson told Buzzfeed, “This is not about live-and-let-live. This is about what is best for the common welfare of society.”

Now there’s something I can agree with! Transgender equality is best for the common welfare of society, and people shouldn’t be tolerant of transphobia.