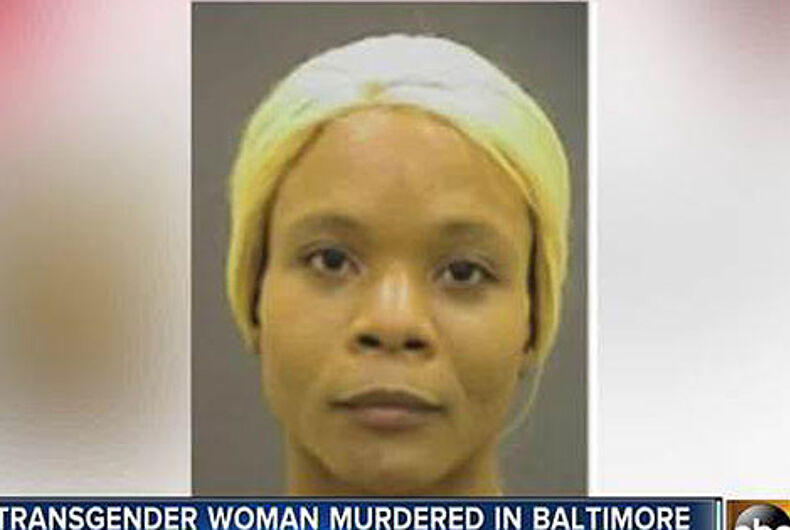 Alphonza Watson of Baltimore, Md., is the 8th transgender American to die by the hand of another human being in 2017. And like every one of the other seven killed, she was a trans woman of color.

Police say at around 4:15am Wednesday, witnesses heard a shout for help, followed by the sound of gunshots, and saw two men running from the scene on North Charles Street. The men got into what was described as “a dark-colored vehicle,” and sped off, according to the Baltimore Sun.

Watson was taken to Johns Hopkins Hospital, where she was pronounced dead a short time later, according to police.

Detectives told the Sun they have no leads, no motive, and can’t say with certainty that whoever fatally shot Watson did so as a result of her being trans. This case marks the 14th homicide of a transgender individual in Baltimore since 2005.

“At this time, we don’t have a lot to go on,” police spokesman T.J. Smith told the paper about the investigation. “What we know is that there was apparently some sort of argument that took place.”

The Baltimore chapter of the Gay Lesbian Straight Education Network also posted a statement to Facebook, before Watson’s name was known.

What we know of Watson is from her mother, Peggy Walker, who spoke to the newspaper about her trans daughter. Walker said Watson came out in her teens and chose the nickname “Peaches.” She grew up in Washington, D.C., but mother and daughter moved to Baltimore about 10 to 15 years ago.

Watson was “the sunshine of our family,” Walker told the Sun, someone who “would never do any harm to anyone.”

“She was a very caring, passionate, fun person to be around, always in a talkative and playful mood,” said Walker. “Very close to the Lord. She didn’t belong to a church or anything like that but she always talked about the Lord.”

Walker said Watson had been a top salesperson at a high-end retail store in Northern Virginia and outside work she enjoyed cooking and gardening.

But in reporting on her life, the Sun felt it necessary to publish Watson’s criminal record without evidence substantiating a connection between her murder and sex work, which for low-income transgender women in urban areas is a reliable but extremely dangerous source of income. Police have yet to connect Watson’s one and only conviction on the charge of prostitution to her violent death.

The last trans woman killed in Baltimore was 32-year-old Crystal Edmonds, who was found shot in Forest Park on Sept. 16., 2016.

The police spokesman on Wednesday revealed a motive in the Edmonds case for the first time: he said she was killed as a result of a robbery. So far, police have made no arrests, Smith told the Sun.

Edmonds was one of 27 trans people killed in 2016, a grim new record for violence against people who identify as transgender in the U.S.

“Not just for this case but any case. I need to meet with the community and sit with them as they come in and talk with other officers and things…I do that,” said Sgt. Bailey, who is the police department’s LGBTQ liaison. “I make myself available to make sure our community feels comfortable.”

There is help for those upset by this murder or concerned they may become a victim of the violence perpetrated trans people. The Gay, Lesbian, Bisexual, Transgender Community Center of Baltimore and Central Maryland encouraged members of the transgender community to stop in to talk with grief counselors.

“I think people of course are going to be grieving,” Key’aysia Tucker, public health case manager at the organization, told the Sun.

Already, several people have reached out, worried about their personal safety. “They are afraid,” she said.

Police ask anyone with information that may help solve the Watson or Edmonds investigations or any case to contact Baltimore police or Crime Stoppers at 1-866-7-LOCKUP.

Below is a list of the victims of 2017 thus far, with links to their stories:

Transgender college students are more likely to be problem drinkers