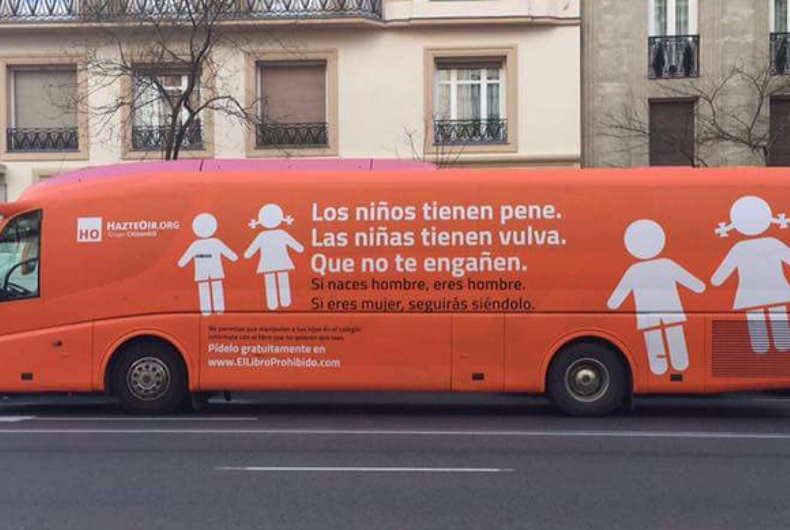 The bus appeared in Madrid earlier this week and is set to tour the country.Photo: Twitter/@ibonpereztv

A bus belonging to conservative advocacy group Hazte Oir (“Make Yourself Heard”) was towed away yesterday morning because of the transphobic message painted on the side.

The bus read: “Boys have penises, girls have vulvae. Do not be fooled. If you are born a man, you are a man. If you are a woman, you will stay that way.”

The bus took to the streets Monday, inspiring protests from the left.

“It is a campaign of hatred based in intolerance,” said Ángeles Álvarez, a spokesperson for the Socialist Workers’ Party.

The city of Madrid and the region of Cataluna asked the Attorney General to intervene.

The mayor’s office investigated the case and found evidence that a city ordinance that bans ads on “any type of vehicle or trailer, in circulation or parked, except those that appear on vehicles intended for public transport” had been violated. Álvarez told El Pais that the prosecutor should look into taking action based on Article 510 of the penal code, which bans speech that incites violence against certain protected groups.

The bus is supposed to tour the country this week, heading to Barcelona on Friday. The mayor of Barcelona tweeted, “In Barcelona there’s no room for LGBT-phobic buses.”

The bus may be a response to an advertising campaign in Basque Country that said, “There are girls with penises and boys with vulvae. It’s that simple.”

Hazte Oir, for its part, insists that the advertisement isn’t “against anyone.”

“The bus is not trying to discriminate or offend anyone. It’s simply recognizing a biological fact, one that is studied in school.”