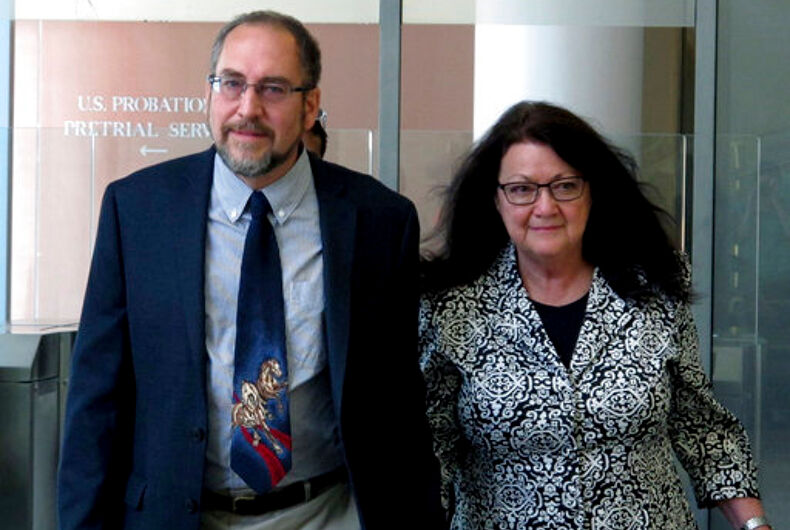 FILE - In this Sept. 22, 2016 file photo, Virginia businessman Philip Zodhiates leaves U.S. District Court in Buffalo, N.Y., where he was on trial for international parental kidnapping and conspiracy. Zodhiates was convicted of the charges on Sept. 29, 2016, after prosecutors say he helped a mother move her daughter out of the country and away from her ex-partner. Vermont U.S. District Court Judge William Sessions on Monday, March 20, 2017, ruled that a lawsuit filed by Janet Jenkins, whose former civil union partner fled the country with their child rather than share custody, is being allowed to proceed because Zodhiates is set to be sentenced in a separate criminal case. (AP Photo/Carolyn Thompson, File)Photo: Associated Press

A Virginia businessman convicted of international parental kidnapping and conspiracy for his role in a same-sex couple’s child custody fight was sentenced Wednesday to three years in prison.

Philip Zodhiates, Waynesboro, drove Lisa Miller and 7-year-old Isabella Miller-Jenkins from Virginia to the Canadian border in 2009 so they could fly from Toronto to Nicaragua. He also helped with their living arrangements in the Central American nation, according to Assistant U.S. Attorney Paul Van de Graaf.

Neither Miller nor Isabella, now 14, have been seen in the United States since.

Lawyers for Zodhiates, the owner of a direct mail business that serves conservative Christian groups, denied that he was trying to obstruct the other mother’s parental rights by helping Miller, who became an evangelical Christian after dissolving her civil union with Janet Jenkins in Vermont.

In court papers, Zodhiates said Miller took advantage of him.

Messages seeking comment from Zodhiates’ lawyers were not immediately returned.

Miller and Jenkins entered into the civil union shortly after the state became the first to legally recognize same-sex relationships in 2000. Miller bore the child, who was conceived through artificial insemination, and both acted as parents.

Miller also is charged with international parental kidnapping and conspiracy and is considered a fugitive.

A third defendant, Timothy Miller, was arrested after being deported by Nicaragua. He pleaded guilty to conspiracy to commit international parental kidnapping. Prosecutors said Miller bought plane tickets to Nicaragua for Lisa Miller and her daughter in 2009 and helped get them settled with Mennonite missionaries in Central America.

A fourth defendant, Kenneth Miller, a Mennonite pastor from Stuarts Draft, Virginia, was convicted of international parental kidnapping in Vermont in 2012 and is serving a 27-month prison sentence.

None of the Millers are related.