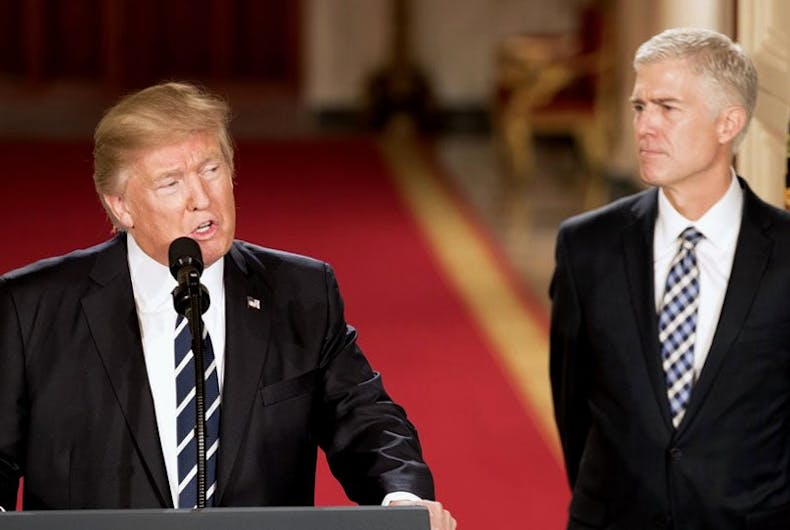 President Donald Trump introduces Gorsuch, accompanied by his wife, as his nominee for the Supreme Court at the White House on January 31, 2017.Photo: Wikipedia

The statement came up when being questioned by Senator Al Franken (D-MN). Franken asked Gorsuch about his “personal views” on same-sex marriage, and Gorsuch refused to answer. “If I were to begin speaking about my personal views on this subject, which every American has views on, that would send a misleading signal.”

He then went on to qualify that statement. “There’s ongoing litigation about its impact and its application right now, and I cannot begin to share my personal views.”

“Ongoing litigation” probably refers to cases seeking religious exemptions to anti-discrimination laws, like the Texas case seeking to deny LGB state workers some of the benefits of marriage.

The topic also came up earlier in the hearings, when Gorsuch was being questioned by Senator Dick Durbin (D-IL) about his relationship with his homophobic dissertation adviser John Finnis. In testimony in defense of a homophobic law in Colorado in 1993, Finnis testified, “Copulation of humans with animals is repudiated because it… treats human bodily life, in one of its most intense activities, as merely animal. The deliberate genital coupling of persons of the same sex is repudiated for a very similar reason.”

Gorsuch refused to answer for Finnis’s comments, even after being pressed. Durbin then asked for his views on LGBTQ people, and Gorsuch replied, “I’ve tried to treat each case and each person as a person, not a this-kind-of-person, not a that-kind-of-person. A person.” He added that “single-sex marriage” has already been held by the Supreme Court as “protected” by the Constitution.

His statement that Obergefell is “absolutely settled law” is stronger than what he said about Roe v. Wade. Gorsuch said he would consider the landmark abortion rights case “as precedent” and that he did not promise Donald Trump that he would overturn it.