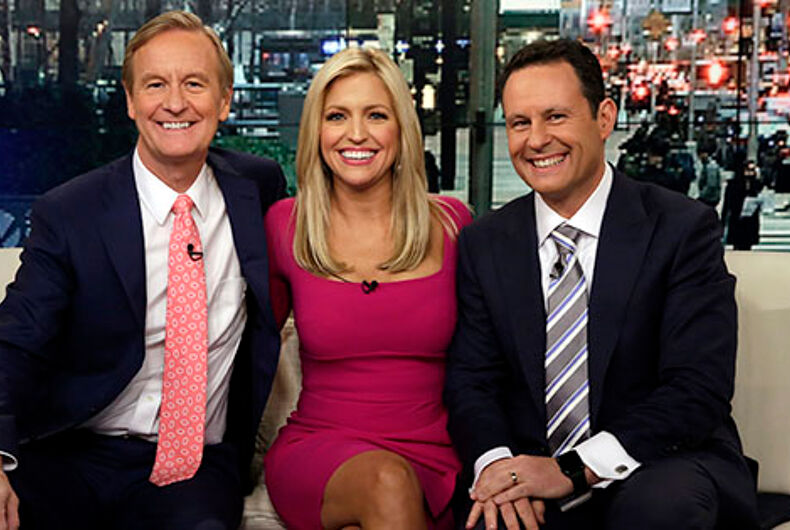 Fox & Friends has emerged as the morning television show of choice for President Donald Trump and his fans, although that may have backfired for Fox News Channel this week.

Like many cable news shows in the Trump era, Fox & Friends has seen ratings jump, and not just in the White House. Its average February audience of 1.72 million viewers was 49 percent over last year’s, the Nielsen company said. The show usually has more viewers than MSNBC’s Morning Joe and CNN’s New Day combined.

President Trump’s Twitter feed provides ample evidence of his devotion, too, with dozens and dozens of retweets of Fox & Friends tweets, as well as those showing his disdain for what he calls the “fake news” outlets.

Just heard Fake News CNN is doing polls again despite the fact that their election polls were a WAY OFF disaster. Much higher ratings at Fox

FAKE NEWS media, which makes up stories and "sources," is far more effective than the discredited Democrats – but they are fading fast!

The failing @nytimes does major FAKE NEWS China story saying "Mr.Xi has not spoken to Mr. Trump since Nov.14." We spoke at length yesterday!

Like Morning Joe, the political talk show whose love-hate relationship with Trump is clearly set on hate right now, Fox & Friends makes no secret of its opinions. Yet the episode with Fox senior judicial analyst Andrew Napolitano illustrated how news and opinion aren’t always a smooth mix.

Napolitano used Fox & Friends as a venue for his discredited report that British authorities helped former President Barack Obama spy on Trump. The White House cited the report to buttress its view that Trump’s predecessor was surreptitiously watching him, but after Britain dismissed it as “nonsense” and Fox said it could provide no evidence to back it up, Napolitano has been taken off the air indefinitely.

Fox & Friends was a frequent punching bag for Jon Stewart on The Daily Show and one media critic, Erik Wemple of The Washington Post, called it “easily the worst in all of televised news” following the Napolitano episode.

Watching it, though, the show appears to capture a sense of discontent and patriotism that appeals to many Trump voters, certainly in a way that mainstream journalists, to a large degree, have been unable to grasp. Robert Thompson, director of the Bleier Center for Television and Popular Culture at Syracuse University, said he suspects many people “enjoy watching it for the thrill of outrage.”

One day last week, the show had segments on “PC police” who were doing away with the designation of homecoming king and queen at a college, a man whose fiancee was killed by a drunken driver who was living in the country illegally, a congressman who received bureaucratic resistance when he tried to hang a portrait of Trump in a veterans’ hospital, and “chaos” on college campuses when conservatives are invited to speak.

Alex French, a 32-year-old working in sales in Charlotte, North Carolina, said he appreciated the show’s reporting on veterans and its interest in news away from the nation’s coasts.

“They do a good job of trying to reach out to people in the small towns,” he said.

Trump, who has declared ABC, CBS, CNN and NBC “the enemy of the American people,” told the three Fox & Friends hosts that “you have treated me very fairly” during an interview on Feb. 28. He did a weekly call-in to the show from 2011 until he announced his candidacy, but still gave frequent interviews as a candidate.

“Maybe without those call-ins, someone else is sitting here,” he said.

Since he’s been president, 12 of Trump’s tweets reference something that appeared on Fox & Friends moments earlier — far more than any other program, according to a compilation by CNN’s Reliable Sources.

After Fox & Friends had a segment with Nick Adams, author of Green Card Warrior, on March 3, Trump tweeted within 25 minutes that the book was a “must read.”

Nick Adams new book, Green Card Warrior, is a must read. The merit-based system is the way to go. Canada, Australia! @foxandfriends

On Feb. 25, Herman Cain cited statistics comparing changes in the national debt in the first months of Trump and Obama’s presidencies; within a half-hour, Trump tweeted that “the media has not reported” the same statistics.

The media has not reported that the National Debt in my first month went down by $12 billion vs a $200 billion increase in Obama first mo.

“Every minute of the show you can tell they are fully conscious of the fact that they know the president of the United States is one of their fans and is getting a lot of information from them,” Syracuse’s Thompson said.

Glenn Thrush, a reporter for The New York Times, tweeted recently that he was starting to watch “Fox & Friends” ”so I can get an early sense of White House policy messaging for the day. Not kidding!”

How the knowledge that the president is watching affects people putting together the show is unclear. Fox declined to make any of the show’s producers, or hosts Kilmeade, Steve Doocy or Ainsley Earhardt available for interviews.

The morning after FBI Director James Comey told a congressional committee that the bureau was looking into ties between the Trump campaign and Russia, “Fox & Friends” mentioned that development in passing. But it also belittled Comey with a rapid-fire clip package showing 20 instances in his testimony where he declined to answer a question.

Kilmeade said the “lack of curiosity” about leaks to reporters “really bothered me.”

Doocy previewed that day’s Senate confirmation hearing of Trump Supreme Court nominee Neil Gorsuch, saying Democrats don’t have a prayer of blocking him, “but that doesn’t mean they won’t try.”

Earhardt interviewed the author of a book who said that the media’s panic about Trump exposed the bias of many journalists.

“We expect journalists to be fair,” Earhardt said. “That’s their duty.

“Our duty,” she added, quickly correcting herself.