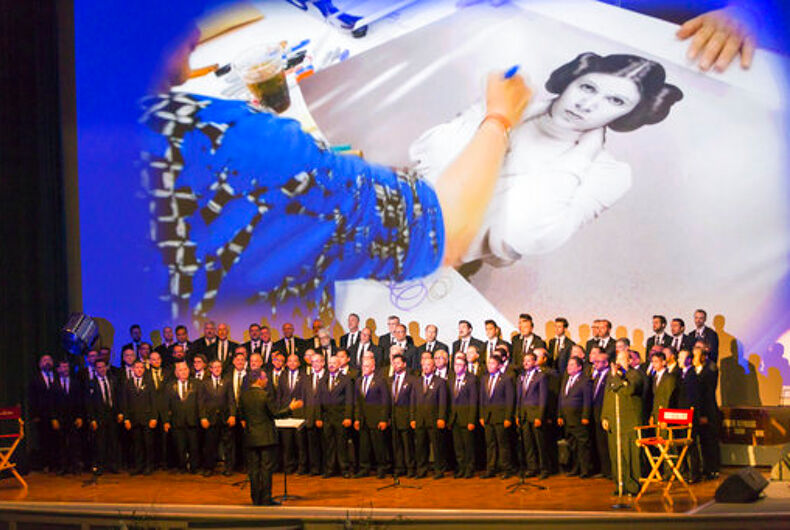 The Gay Men's Chorus of Los Angeles performs at the Carrie Fisher and Debbie Reynolds Memorial Service at The Forest Lawn on Saturday, March 25, 2017, in Los Angeles. Photo: Photo by Willy Sanjuan/Invision/AP

LOS ANGELES (AP) — Laughter, music and the tapping of dancing shoes reverberated throughout a public memorial to Debbie Reynolds and Carrie Fisher, which loved ones say is just how the actresses would have wanted it.

There were few tears throughout the two-hour ceremony Saturday, which honored the mother-daughter duo’s impact on film, culture and those who knew them with a mix of photos, videos, and anecdotes that kept the audience laughing and applauding.

Todd Fisher led the ceremony, which he said was intended to bring fans an intimate view of his mother and sister. He called it a show, saying his mother hated to attend memorials.

Hundreds of fans — some wearing “Star Wars” attire — attended the public ceremony that featured numerous family photos and Reynolds’ final interview reflecting on her life and philanthropy, and one of Fisher’s high school friends sharing some her off-color emails to him.

A troupe from Reynolds’ dance studio performed an homage to “Singin’ in the Rain,” the film that catapulted Reynolds to stardom at age 19. After an opening film that was an ode to Fisher’s “Star Wars” role, a working R2D2 unit came on stage, mournfully beeped and parked next to a director’s chair with Fisher’s name on it. Across the stage, near a piano, sat an empty chair with Reynolds’ name on it.

Fisher, 60, an actress and writer who starred as Princess Leia in the original “Star Wars” trilogy, died Dec. 27 after suffering a medical emergency days earlier aboard a flight from London. Reynolds, an Oscar-nominated actress for her role in “The Unsinkable Molly Brown,” died the following day at age 84.

Todd Fisher recounted his mother’s final moments and her remark that she wanted to be with her daughter.

“It was a very peaceful exit that only my mother could have orchestrated,” he said to booming laughter. “She was trained in Hollywood where they teach you to make a great entrance, and exit.”

Fisher and Reynolds had a complex relationship, with some years of estrangement before they reunited and became close confidantes.

Actor Dan Aykroyd described Fisher, his one-time fiancée, as a chatterbox who never let him speak. He described using the Heimlich maneuver on her once, and joked that if he had been on the plane where Fisher fell ill in December, he “might have been able to save her again.”

He echoed a sentiment expressed by many early in his remarks. “We really shouldn’t be here this soon,” he said.

Dunne recounted living with Fisher in New York when they were both young actors, and her initial reactions to working on “Star Wars.” He recounted Fisher’s assessment of the film: “It’s stupid and it’s terrible.”

When speakers weren’t delivering one-liners — some that had been uttered or penned by Fisher and Reynolds — music and dance took over the stage. The ceremony featured a new song James Blunt wrote after Fisher’s death, and the Gay Men’s Chorus of Los Angeles performed a somber rendition of Cyndi Lauper’s “True Colors” that celebrated Fisher’s status as a feminist icon.

Actress Ruta Lee celebrated Reynolds’ philanthropy in her eulogy, which included her singing to troops during the Korean War and her later efforts raising millions to help those suffering from mental illness. Carrie Fisher battled mental illness and addiction, exploring her struggles in the book “Postcards from the Edge.”

Fisher discussed her mother’s charitable work in a video clip, joking: “She sort of started what this town was going to need quite a bit of, which was treatment for the mentally ill.”

Lee said it was OK to feel sadness at the deaths of Reynolds and Fisher, but not to dwell on it. “Debbie the unsinkable and her beautiful daughter would never want us to mourn,” she said.

Author Gavin de Becker, who attended high school with Fisher and recounted how his infatuation with her turned into a lifelong friendship, said his friend “zoomed through time” and made so many people’s lives better. He recounted how Fisher took him on international trips and “gave me so many firsts.”

“The first time I had sex was at Carrie’s house,” de Becker said. “It wasn’t with Carrie, but she arranged it.”

It was one of many tales about the actresses that drew boisterous laughter.

After the service, fans were invited to see the actresses’ final resting place at Forest Lawn – Hollywood Hills, a storied cemetery where numerous celebrities, including Bette Davis and Liberace, are buried or interred.

Many also paused to snap photos with some of the actresses’ memorabilia that was displayed outside the theater, including two dresses Fisher wore while filming “Star Wars” and “When Harry Met Sally,” and two of Reynolds’ costumes from “Singin’ in the Rain” and “Unsinkable Molly Brown.”

Anthony McCartney can be reached at http://twitter.com/mccartneyAP