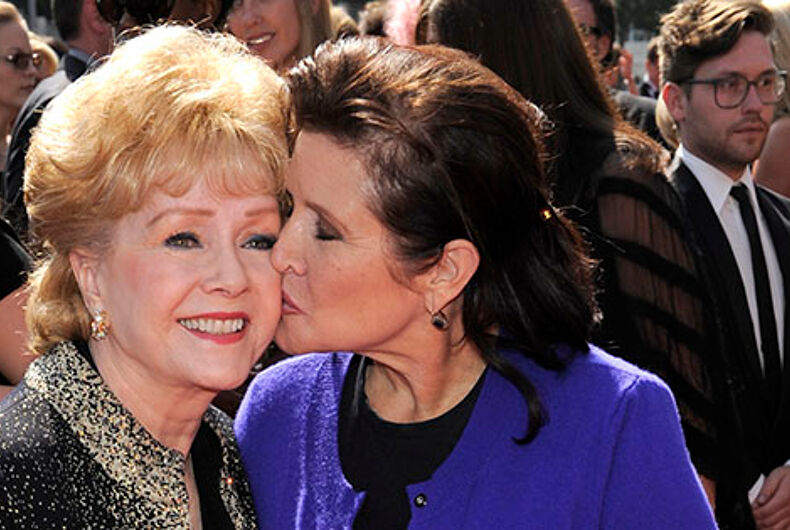 Her son, Todd Fisher, said Reynolds died Wednesday, a day after her daughter, author and actress Carrie Fisher, who was 60.

“She’s now with Carrie and we’re all heartbroken,” Fisher said from Cedars-Sinai Medical Center, where his mother was taken by ambulance earlier Wednesday.

He said the stress of his sister’s death “was too much” for Reynolds.

Reynolds was not yet 20 when she won a starring role in the Gene Kelly musical “Singin’ in the Rain.” She was also known for her Oscar-nominated role in another musical, “The Unsinkable Molly Brown.”

Her messy divorce from singer Eddie Fisher, who left her for Elizabeth Taylor, made headlines in the late 1950s.

In a 2014 interview, Reynolds declared, she dated a lot of gay men.

“Everyone I dated was gay. Everyone, except Robert Wagner,” she told The Telegraph. “Otherwise they wouldn’t be hired.”

“Women don’t want to go and see a new movie with a gorgeous looking guy who kisses men. Rock [Hudson], was a close friend, he was gay but he didn’t dare come out so he married his agent’s secretary just to cover it up. He never lived with her and they paid her. Of course it still goes on. Now who’s to say there’s anything wrong with that?”