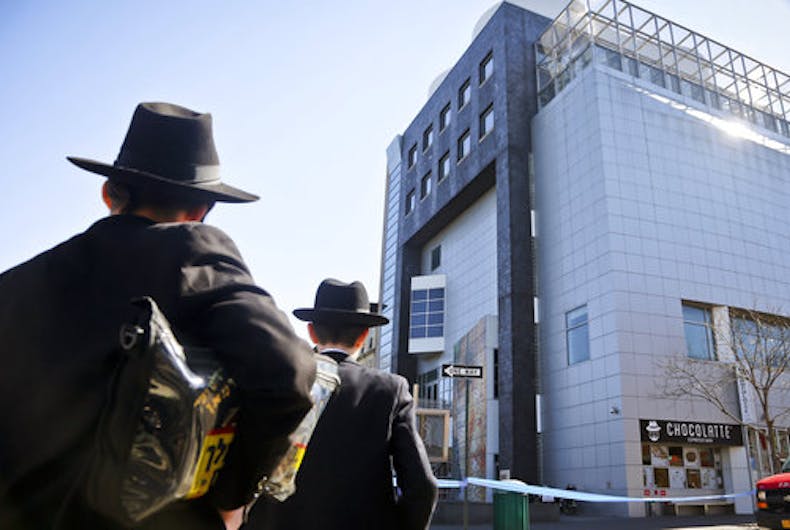 In this Thursday March 9, 2017 file photo, two young men who left a nearby synagogue watch police activity outside the Jewish Children's Museum following a bomb threat in Brooklyn borough of New York. Jewish groups who warned of a surge in anti-Semitism had pointed to numerous bomb threats against Jewish community centers as the most dramatic example of the trend. Now authorities say an Israeli Jewish teen is responsible, potentially undermining the community’s fight against bigotry and embarrassing those who blamed a far-right emboldened by President Donald Trump. Photo: AP Photo/Bebeto Matthews

The joint investigations by Israeli law enforcement agencies and the FBI in the arrest of the suspected perpetrator of bomb threats on Jewish community centers in the United States and other countries raises more questions than it answers.

Was this Jewish 19-year-old of dual U.S. and Israeli citizenship the only person involved? And what were his motives?

In response to the arrest, the Anti-Defamation League issued a statement asserting: “These were acts of anti-Semitism. These threats targeted Jewish institutions, were calculated to sow fear and anxiety, and put the entire Jewish community on high alert.”

Though we do not yet have a psychological profile of this young man, if it turns out that he was, in fact, the architect and agent of these terrorist threats, it matters not that he is Jewish. The choice of targets makes these acts anti-Semitic.

Jewish people, and other people of socially marginalized identities and communities, still live in a world that, in many quarters, teaches that we are “less than,” that we do not have a right to exist, and even that we actually do not exist. As such, we can find it difficult at best not to internalize society’s negative teaching about ourselves.

Unfortunately, some of us have taken on the characteristics of our abusers by perpetuating the abuse. I ask, then, what role does internalized oppression play in this equation?

We can understand internalized oppression as the internalization, consciously or unconsciously, of external attitudes, teachings, myths, lies, and stereotypes of inferiority, inadequacy, self-hatred, and sense of “otherness” by the targets of systematic and systemic oppression.

Suzanne Lipsky, referring to racism, discusses the “distress patterns” of internalized oppression: “The result has been that these distress patterns, created by oppression and racism from the outside, have been played out in the only two places it has seemed ‘safe’ to do so. First, upon members of our own group — particularly upon those over whom we have some degree of power or control…. Second, upon ourselves through all manner of self-invalidation, self-doubt, isolation, fear, feelings of powerlessness, and despair.”

The notion that the perpetrator of bomb threats against Jewish institutions could himself come from a Jewish background brings up very traumatic memories for me. I grew up with a family member on my mother’s side who deeply resented his Jewish religious and cultural roots, and, I believe, operated from a place of internalized anti-Semitism.

His parents told me that he refused to date Jews while he was in high school. He straightened and bleached his hair, and he desperately wanted to have nose reduction surgery so he wouldn’t “look Jewish.”

Soon after moving away from home, he joined the so-called “Jews for Jesus” or “Messianic Jewish” movement. He wears around his neck a Star of David with a Christian cross intertwined. On the very infrequent occasions when I see him at family events, he tells me that he “prays for me” and he hopes I will “find Jesus.”

Since an incident in the early 1990s, I have increasingly distanced myself from him. We were driving in his car, when he confronted me by saying that “You are going to Hell twice.”

More amused than shocked, I responded that though I don’t believe in the Heaven/Hell binary, I didn’t realize that a person could go to Hell more than once. That would imply that the Devil allows occupants passes to leave and reenter.

He argued, “You are going to Hell first for being a practicing homosexual.” I responded that I don’t have to “practice” since “I’m already really good at it,” which he did not find humorous.

He then asserted that I’m also going to Hell for not opening my heart and allowing Jesus in as my personal savior. I explained that while his choice might make sense for him, I am happy with how and what I am as a Jewish gay person.

“Just for the sake of argument,” I continued, “as you know, the Nazis murdered many of our Polish mishpucha. Where are our family members today?”

Without hesitation he quipped, “You don’t know they didn’t accept Jesus before the Nazis killed them!”

“Well,” I countered, “since they were practicing Orthodox Jews, I must assume that they did not convert to Christianity when the Nazis marched them into the woods and shot them, or transported and murdered them in concentration camps.”

His response: “Well then. They’re in Hell.”

The rage, the anger, the hatred erupted from the very depths of my being, for this was the most hateful statement I had ever heard.

“Let me out of this car,” I heard myself demand in as constrained a manner as I could muster. Several months passed before I could contact him. When I did, I stated that if we were to have a relationship, Jesus and homosexuality must remain off the table.

Though I have never broached our conversation since that day, and he would most likely not even remember it, I truly hope he no longer believes what he expressed to me that day.

While his is an extreme form of internalized anti-Semitism, I have come to realize that it arises in many forms. We cannot begin the process of unlearning this oppression until and unless we work to become aware of our own distress patterns, for it is much easier to direct our anger and blame – to project — outward onto others, than to look within ourselves to our own injuries.

Though I have been involved as a political activist and community organizer for over 50 years of founding and working for organizations and activist groups, through years of undertaking my “personal” work, on a nearly daily basis, I continually become aware of the “stuff” still in my head: the self-doubts, the shame, the fear of living as a Jewish gay person.

For us to work to our fullest potential, we must also work on our “stuff,” the ways in which we have internalized those subtle and not-so-subtle messages, how this has limited us, and how we can dismantle this internalization and move forward.

I hope the suspected instigator of the recent bomb threats will now receive the help he needs.