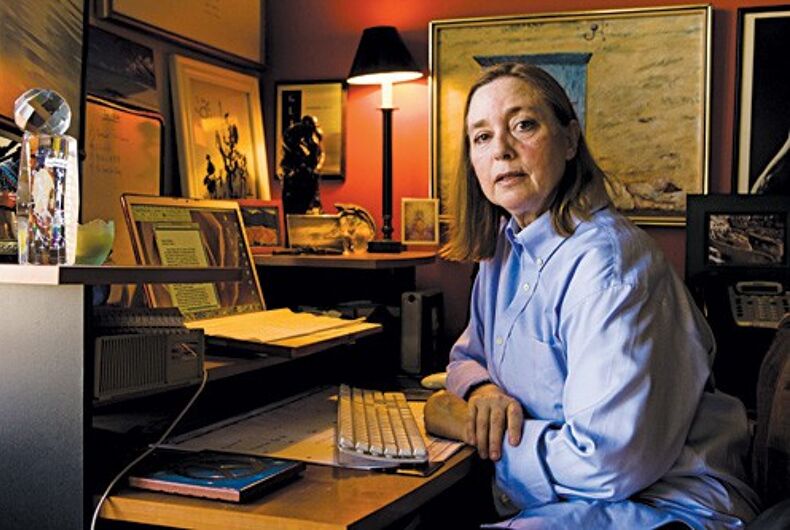 Last year in February, veteran journalist Karen Ocamb was told that she was “laid off” from her position as news editor at Frontiers magazine.

In an interview immediately following being fired, Ocamb said that she understood the decision. “I see my being laid off as a purely financial business decision, no matter what direction the new owners may choose,” Ocamb told PressPassQ.

That was before she knew the full story about why her employment was terminated. Bobby Blair, the CEO of Multimedia Platforms Worldwide, which owns Frontiers, said that she was fired because of her age. “Unfortunately, Karen fell where we realized we were moving toward a digital and Millennial audience, and we wanted to give the generation of Millennials a real shot at creating our content,” Blair said.

In a column at the Los Angeles Blade, Ocamb says that she has filed suit against Multimedia Platforms Worldwide.

Ocamb says that at first she didn’t know how she wanted to proceed. But after seeing Senator Mitch McConnell silencing Senator Elizabeth Warren for reading from a letter by Coretta Scott King, her motives became clearer to her.

“That was a gut-check. I realized I had silenced myself to be ‘nice,’ to be ‘fair,’ to be ‘brave’—all the learned traits growing up female in a military family,” Ocamb wrote. “Despite my hard-earned reputation, despite working diligently to contribute to both the publication and the LGBT movement, despite having to put up with what at times was a hostile working environment where I was expected to shrug off antics and comments and endure sneers when I complained, I was tossed out to make way for millennial writers—according to a published interview with the owner.”

In October, Frontiers suspended publication when its parent company filed for Chapter 11 bankruptcy.

This past week, the Washington Blade launched a sister publication, the Los Angeles Blade, and hired Ocamb as a senior contributing writer.