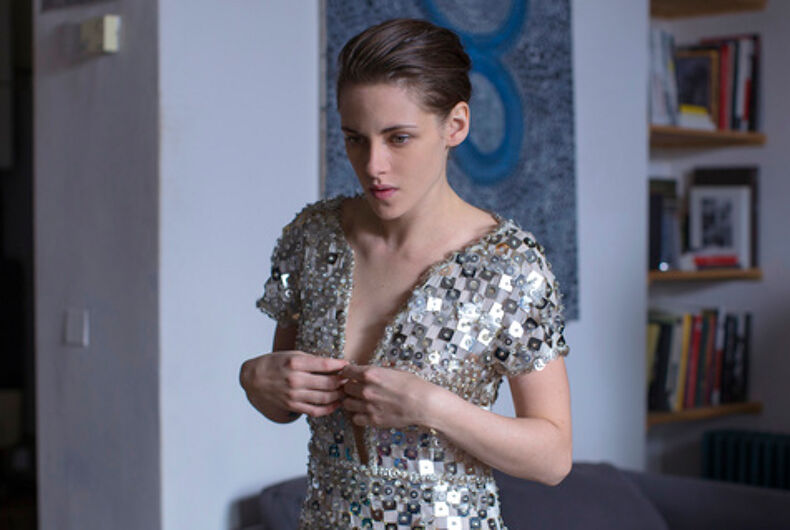 NEW YORK (AP) — In the disheveled backroom of an East Village restaurant, Kristen Stewart is sarcastically motivating the French director Olivier Assayas for a photo shoot.

“You’re in America now, dude,” Stewart jokes. “We’ve got to sell the s— out of this movie.”

Stewart, a blockbuster veteran at 26, is well acquainted with the demands of movie promotion. But with Assayas, she has found a freedom from such concerns. She and the director have forged an unlikely but formidable bond that has resulted in two highly acclaimed movies, both made in Europe, far outside of Hollywood jurisdiction.

They’re an odd pair: She, a rebel A-lister from Los Angeles who has become one of the movie’s most exciting and uncompromising actors; he, a demure Parisian whose layered, cerebral films teeter between reality and fiction.

“I’m not sure,” says Assayas. Stewart nods. “That’s the main question,” she says. “I don’t know. We like each other.”

Their latest film, “Personal Shopper,” is full of mysteries, too. It’s a ghost story, set in a contemporary world of texting and Googling. In the film, which opened Friday, Stewart plays a twin whose brother has just died. Her day job is shopping in Paris for a stuck-up celebrity, but she’s also a medium, and a series of strange encounters make her believe a spirit (her brother?) is contacting her.

“Personal Shopper” follows their previous “Clouds of Sils Maria,” also a singularly enigmatic movie in which Stewart played support staff (an assistant to Juliette Binoche’s theatre actress) to a more famous character. (The part earned Stewart a Cesar, the first American to win the French award.) But by stepping into characters out of the spotlight — and into films outside of Hollywood convention — Stewart has never been so much herself on screen.

“I could be making movies about Kristen being a movie star or whatever persona any actress has on social media,” says Assayas. “But what interests me is the person. So I throw the burden of celebrity on someone else, so she can be free of it.”

“Maybe for the next one I could play a famous actress,” jokes Stewart. “Try to normalize that!”

There were plenty of moments while making “Personal Shopper” where Stewart’s fame invaded. Shooting on the streets of Paris (Stewart drives a moped through the city in the film), they were surrounded by paparazzi. Assayas acknowledges for that and other reasons (a difficult crew, his underestimation of the complexity of a lengthy texting sequence) the movie had “a weird energy.” ”We struggled for this film,” he says.

But Stewart says she channeled the intrusions into her haunted character. “I thought I was being taken from, and it was good,” she says. “It made me more sensitive. My nerves were very close to the surface.”

In the two films, Stewart has relished the chance to slyly remark on the celebrity industrial complex.

“As an outsider, you’re allowed to comment very honestly about things that are undeniably, objectively strange,” says Stewart.” But if you’re the person who is at the center of that, then all of a sudden those comments become scathing and you’re ungrateful and whatever. It was nice to be able to speak the truth and not be harpooned for it.”

Yet the former “Twilight” actress, with freshly buzzed blonde hair, has deservedly made a reputation for herself as an unusually forthright and frank star. She has taken part after part, usually in smaller, indie productions (“Certain Women,” ”Equals,” ”Cafe Society”), with an insatiable urge to work, to keep exploring. Stewart also debuted a short film she directed at Sundance this year.

In a memorable “Saturday Night Live” monologue earlier this year, she reflected on when Donald Trump in 2012 repeatedly tweeted that her then-boyfriend Robert Pattinson should “dump” her. “It was inconceivable, actually,” Stewart says. “At the time, I regarded him as like a reality-show star. I was like: Who is this guy?”

“To be honest, there are so many significant and very effecting things that he has said and says all the time,” continues Stewart. “This was just a stranger, fascinating one because it’s so piddly in terms of what matters. It was worth everyone knowing that because it’s f—— weird.”

She also, in a rebuke to Trump and an inspiration to others, announced, “And I’m like so gay, dude.”

“I’ve really allowed myself to really freely and with no regard to the effect of others live my life,” says Stewart. “There was just a time where I realized that the things you do and say when you have so many people looking at you, they do affect others. So I’m really proud of it. But at the same time, I hate that it’s such a big deal. It’s a fact of life right now but it’s like, whatever. To me, it’s not personally that big of a deal but I know that it can be to others.”

Stewart and Assayas may, in many ways, be opposites. But they’re both prone to following their instincts in unpredictable directions and pursuing questions they know won’t lead to answers. Whatever the reason, they’re a match.

“It’s a fact that a film like ‘Personal Shopper’ happens because of Kristen,” says Assayas. “The way we function allows me to try, eventually, more daring things. In a certain way, she protects me.”

© 2017, Associated Press, All Rights Reserved.
This material may not be published, broadcast, rewritten, or redistributed.
Life
Kristen Stewart