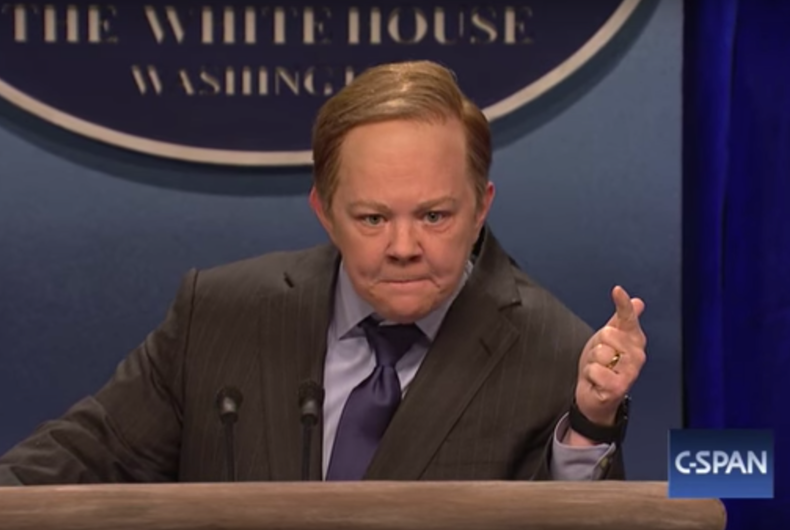 Last night, actress Kristen Stewart came out as “so gay” in her Saturday Night Live opening monologue. That fact comes as no surprise — the actress has openly dated women — but it’s the first time Stewart has so publicly stated it.

In her opening remarks, Stewart reminded viewers of Trump’s one-time obsession with her and ex-boyfriend/”Twilight” co-star Robert Pattinson. She said the president tweeted about the couple’s relationship drama 11 times, always siding with Pattinson.

“The president is not a huge fan of me, which is so OK, because Donald, if you didn’t like me then, you’re really probably not going to like me now,” Stewart said, “because I’m hosting ‘SNL’ and I’m like, so gay, dude.”

In the past, Stewart has avoided labels. Back in 2015 she told Nylon they were overrated.

“I am an actress, man. I live in the fucking ambiguity of this life and I love it. I don’t feel like it would be true for me to be like, ‘I’m coming out!’ …I think in three or four years, there are going to be a whole lot more people who don’t think it’s necessary to figure out if you’re gay or straight. It’s like, just do your thing.”

But Stewart wasn’t the only thing about last night’s episode that Trump won’t like.

Alec Baldwin returned for SNL’s cold open, with a sketch that mocked the president’s approach to foreign relations, his obsession with the performance of “The Apprentice,” and the sway advisor Steve Bannon seems to have over him.

Bannon (played by Death) goads a tired and cranky Donald into calling allies and declaring war. When he gets to Germany, Angela Merkel (Kate McKinnon) tries to hang up but the president starts rambling about how he’s going to write a memoir about the difficulties he’s faced and call it My Struggle — “What would that be in German, Angela?” (Hint: Hitler had a similar train of thought.)

After being schooled by an experienced dictator (Zimbabwe’s Robert Mugabe, played by Keenan Thompson), Trump relinquishes the desk in the Oval to the real president.

McCarthy goes all out, channeling not only Spicer’s look, but his physicality as well as Spicer shouts lies, threatens reporters, and makes bizarre use of visual aids.