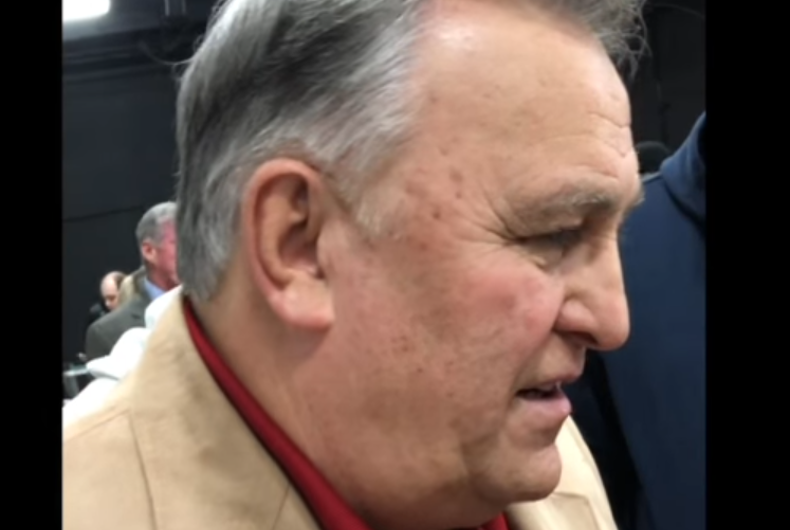 Last month, Republican Iowa representative Ralph Watts was talking at a small forum and gave a speech that lasted over an hour. Several times during the speech, Watts asked “Where is red rider?” referring to his Democratic opponent from last year’s elections, Bryce Smith. the husband of his election opponent from last year, Democrat Bryce Smith. Smith’s husband was attending the forum, recorded the speech, and put it on social media.

One Iowa, a local LGBTQ organization, denounced his use of the term “red rider” as an antigay slur. Watts immediately responded saying that he didn’t even know that “red rider” was a slur, and he was saying “Red Ryder,” referring to a type of BB gun.

“Red Ryder BB gun is the thing that falls in the category of a kid’s first gun, and it’s used to teach kids how to use a weapon and shows them responsibility and shows they’re capable of using something more powerful,” Watts told The Des Moines Register. “With some of the things that have happened, the constant sniping and constant obscure criticism shows me that he hasn’t progressed past the Red Ryder stage… I hadn’t heard about the slur until he brought it up.”

Smith responded to the controversy by saying that Watts’s intent didn’t matter, and that even if it wasn’t meant to be an antigay slur, it’s still pretty disrespectful and immature to refer to another person that way. “Whether he meant it as a gay slur or not, words have repercussions and consequences, regardless of how you meant it. You can take it into other contexts. If he meant ‘not a real gun,’ it’s still not respectful to his constituents and shows a level of behavior that should not be accepted, especially in elected officials.”

At the time, LGBTQ Nation‘s Bil Browning asked “Is this a thing?” and discussed Urban Dictionary’s entry on “red rider,” which doesn’t show it to be an antigay slur. Commenters hadn’t heard of that antigay slur, and I’ll add that I’ve never heard the term used in that context, either.

This weekend, a constituent brought the incident up at a local event, asking, “You do know that’s a slur?”

To which Watts responded that he didn’t know, adding “Anything you say to a gay anymore is a gay slur.”

I’m pretty sure that “red rider” is not an antigay slur, but it’s still heart-warming to see well-intentioned straight people denouncing the term. It reminds me of a moment from this sketch I posted last week where a group of gay men convince a straight dude that “dave” is an antigay slur.

Watts won’t be grand marshaling any parades considering his dismissive response, his use of the term “a gay,” and how he praised his LGBT constituents because they don’t “throw [their lifestyle] in my face at all.”

Still, I can understand how he’d be annoyed by this whole thing. Maybe the lesson here is to not call other people names behind their backs while the cameras are rolling.

Do you agree with these new guidelines on gender-neutral pronouns & ‘LGBTQ’?

All-Star volleyball players settle their squabble with a kiss