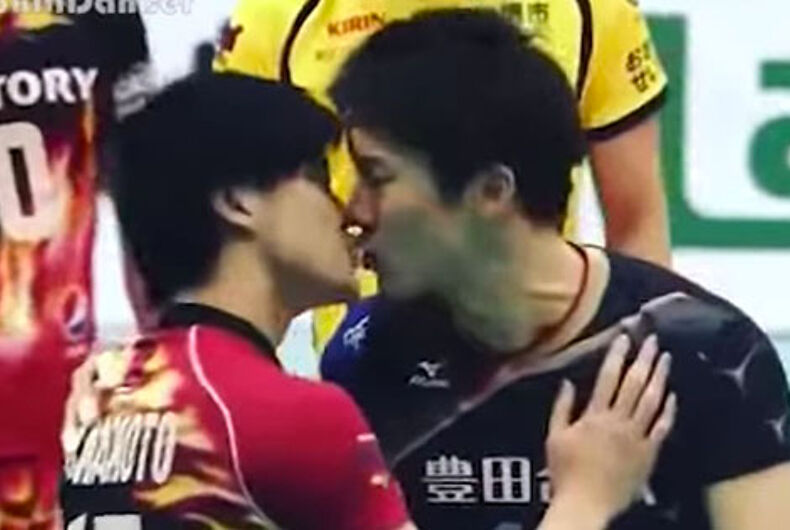 A fight on the floor of a men’s volleyball tournament in Japan ended with a surprise smooch between two opposing players, to the delight of their fans, and without a single boo.

The weekend match between the teams of Sun Yamagata and Toyoda came to a halt when a referee called a foul, and Takua Takamatsu argued with Yu Yamamoto over who committed the foul.

The argument crossed the line, literally, as Takamatsu walked under the net to confront Yamamoto face to face.

Fans on both sides could be heard cheering as the men shoved at one another, even as teammates stood by, smiling, not interfering.

As they drew closer to one another, it became clear these two were going to get in each other’s faces. But no one expected this:

After the match, Yamamoto tweeted his thanks to his fans, as did Takamatsu, who boasted he gained 10,000 followers as a result. The tweets in response were positive, using the words fun, and at least one “shocking,” but all in support of their way of settling the disagreement.

Gay Star News notes there are no out players in Japanese volleyball, and Takamatsu told reporters he “loves [Yamamoto] like a little brother.”

One fan summed it up best as the greatest exhibition of good sportsmanship, ever.

Iowa Republican: ‘Anything you say to a gay anymore is a gay slur’

Coming to your TV: Reality series set inside the Abbey in WeHo