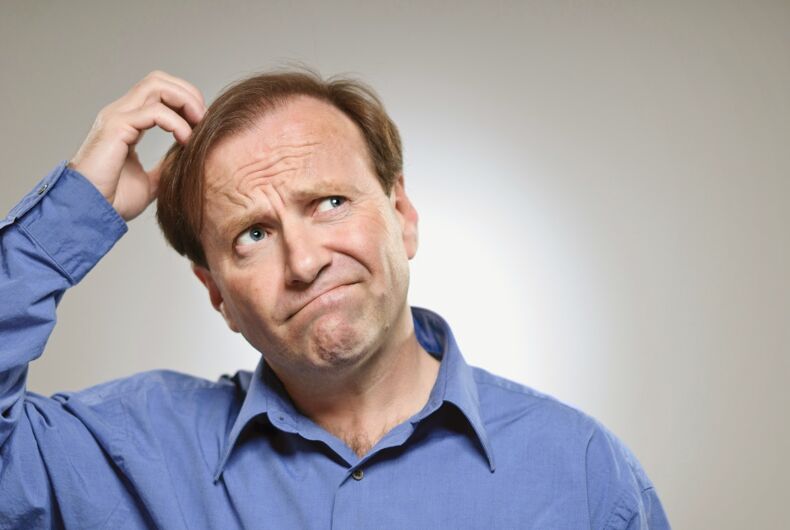 Have you ever heard the term “red rider” used as an anti-gay slur? One Iowa says that it is and they’re angry that a state representative used the term during an argument with a gay constituent.

On February 4, Republican legislator Ralph Watts held a public forum. When he was approached by a constituent who was recording the event, the legislator started demeaning the man – and his husband.

Why? The man’s husband, Bryce Smith, ran against Watts in the general election.

During the argument, Representative Watts called Smith a “red rider,” which One Iowa describes as “a derogatory term for a gay man.”

Urban dictionary does have one definition of the term as a slur, saying it refers to “the top in a gay relationship, or the man who penetrates his partner. An additional characteristic which makes a Red Rider is that he does not wear protection (condoms) and is into rough sex.” The top definition for the term is the more common reference which is specifically heterosexual.

“Homophobic slurs should never be used, especially by an elected official,” One Iowa Executive Director Daniel Hoffman-Zinnel said. “We must continue dialogue on inclusion and civility with an understanding of how slurs like this impact real Iowans. Respect is a nonpartisan Iowa value, and leaders in our communities must model civil discourse. Bryce Smith deserves an apology from Rep. Watts.”

Smith, who was not present at the forum, shared the video on Facebook. The video may be found here, and the exchange begins around the 1:09:30 mark.

But most importantly, is this a term you’ve ever heard used as a slur before?