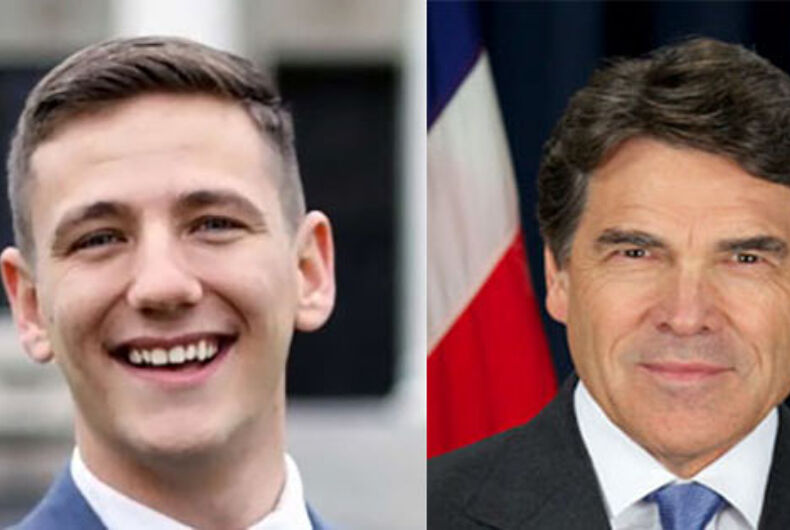 Bobby Brooks, the openly gay student body president at Texas A&M, would like to meet with Rick Perry, the former Texas governor who’s been attacking the student in the news.

The strange situation was touched off weeks ago during a contentious student body election featuring accusations of voter intimidation and fraud that disqualified Brooks’ opponent. After Brooks was named president, Rick Perry — an alumnus of Texas A&M who is now serving in the notoriously homophobic Trump administration — wrote an op-ed suggesting that Brooks won the election through illegitimate means. It was a weird move that echoed a scandal from several years ago in which a high-ranking government official in Michigan issued relentless attacks on a gay student leader. And the irony that Perry would complain about a president who won election without securing the popular vote was not lost on many.

Brooks has now responded with an extremely gracious letter in which he simply ignored Perry’s accusations: “I would like to invite you to come to Texas and meet with my team and me as we take office later this month to discuss how we can work together to achieve our common vision… We have many students on this campus from all walks of life, whose perspectives I would care to share with you.”

Will Perry take him up on the offer? It’s too soon to tell, as his office has so far refused comment. But GLAAD is lending its support to Brooks, and set up a petition asking Perry to travel to his home state to meet with the student that he had previously attacked. According to a statement by Sarah Kate Ellis, president and CEO of GLAAD, “young people like Bobby Brooks are the future, and should be encouraged, not harassed.”

It’s worth noting that Texas A&M has been consistently called out over the years for being a hostile environment for queer students. The Princeton review frequently placed the school on its list of “least LGBTQ-friendly.” But Brooks was willing to put his safety on the line by attending the university, telling the student newspaper, “My sexuality was a non-issue in terms of selecting Texas A&M as a university because I knew what this university could offer.”

His platform includes pledges to address the diversity issues that continue to plague the school, addressing rising school costs, and improving services offered to students. He also seems to be providing the approximately 60,000-member student body with a practical lesson in grace and forgiveness, writing on Facebook: “To those of you who spoke poorly about me based upon my sexual orientation or personal religion (and talk gets around, my friends), I forgive you. I really do.”

His position of leadership will hopefully serve as an inspirational lesson to many — including to other elected officials who ought to have learned such a lesson many years ago.

Go for a smoke? New study says most teens lighting up are queer or questioning