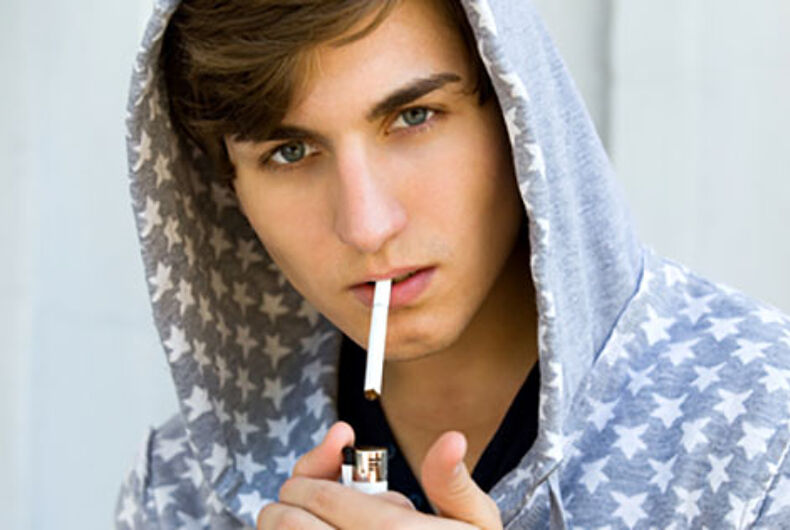 Yet another study has emerged that sheds light on health risks associated with minority stress — but it also highlights numerous knowledge-gaps yet to be filled.

In a new paper in the journal Pediatrics, researchers found that tobacco use rises among teenagers who are queer or even just questioning their sexuality. According to researchers, only 30 percent of straight-identifying teens have tried tobacco products, compared to 41 percent of gay and lesbian youth, 39 percent of bisexual youth, and 32 percent of those who are unsure of their orientation.

Lesbians are particularly at risk for unhealthy use of tobacco, with double the rates of smoking.

The figures were drawn from a survey of nearly 15,000 students. That large number of participants allowed researchers to gather significant data on minorities that are otherwise difficult to reach in large quantities. Even in this student, only 6 percent of the students identified as bisexual, with 2 percent saying that they’re gay or lesbian.

But as extensive as the outreach was, the study still leaves significant room for further investigation. For example, researchers did not differentiate between tobacco products, so it’s impossible to determine the rates at which teens are using e-cigarettes, chewing tobacco, cigars, and so on.

There is also no data in the study regarding transgender teens. High school dropouts were also excluded from the study. Those gaps are particularly noteworthy, given the high levels of stress and risk-taking associated with both groups.

Nevertheless, the study’s authors concluded that there are some clear next-steps. They called for policies that specifically address sexual minority youth in tobacco control efforts. That could take the form of education that is tailored to LGBTQ teens, or cessation programs customized for community centers.

This is far from the first time that such a study has emerged. For many years, researchers have been tracking the high rates of tobacco use in the LGBTQ community. While the general population that smokes has declined from 21 percent to 15 percent over the last decade, among queer people it’s at around 31 percent.

Among the biggest questions still unanswered: why exactly are smoking rates so high for LGBTQ people? It’s a complicated question with many contributing factors. But the stress of being an outsider and of fearing rejection is often cited by researchers outside of this study.

Unfortunately, smoking is among the most harmful means possible to deal with stress. Though it may provide a short-term distraction, tobacco use will hasten the user’s death, causing serious painful illnesses such as lung cancer, stroke, and heart disease. It can take up to a decade after quitting for a smoker’s risk of cancer to drop to levels near that of a non-smoker.

One of the best means to prevent teen smoking, according to researchers: a supportive family environment. Parents who love and accept their child have been found to have a dramatic impact on reducing the risk of tobacco use.