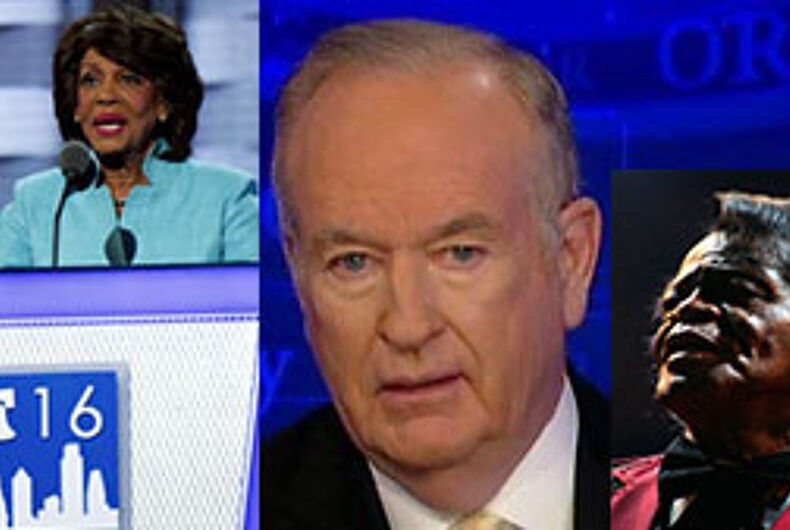 Fox News host Bill O’Reilly scored some yucks with the couch potatoheads on Fox and Friends Tuesday morning with a cheap shot at Rep. Maxine Waters, but as the heat from Media Matters and other defenders of the California congresswoman poured-in, the conservative Catholic confessed he had gone too far.

“As I have said many times, I respect Congresswoman Maxine Waters for being sincere in her beliefs,” O’Reilly said in a statement reported in The Hill, “I said that again today on Fox & Friends, calling her ‘old school.'” Then the famously hotheaded former newsman apologized to Waters.

“Unfortunately, I also made a jest about her hair, which was dumb. I apologize.”

The “jest” was a reference to the longtime lawmaker’s hair. He couldn’t hear the voice of the African-American, O’Reilly said, because “I was looking at the James Brown wig. If we have a picture of James, it’s the same wig.”

“And he’s not using it anymore. They just — they finally buried him.”

Actually, Brown’s remains were buried in 2007.

Then the show’s sole female cohost got on up and joined the conversation in defense of Waters.

But Earhardt wasn’t done defending Waters. “Her hair is pretty,” she said.

“I love James Brown,” said O’Reilly. “But it’s the same hair, James Brown — alright, the godfather of soul — had.”

“So he had girl hair?” Earhardt asked the “O’Reilly Factor” host.

“Whatever it is,” he responded, “I just couldn’t get by it.”

Lost in all the coverage of a white man commenting on what a black woman does with her hair was the content of her words. Her Capitol Hill message to those who criticize the Democratic party and others opposed to the president’s policies were captured on C-SPAN and posted online by the Washington Post:  “You’re not nearly as patriotic as we are.”

Although Waters has not yet commented on O’Reilly’s remarks, she did have something else to say about President Donald Trump on Monday, which might have further rankled Trump’s conservative puppets over at Fox News Channel:

“I’m out to get him,” Waters vowed to Elle magazine, according to The Hill. “I’m gonna see him out of office. And I think it’s going to happen. Get ready for impeachment.”