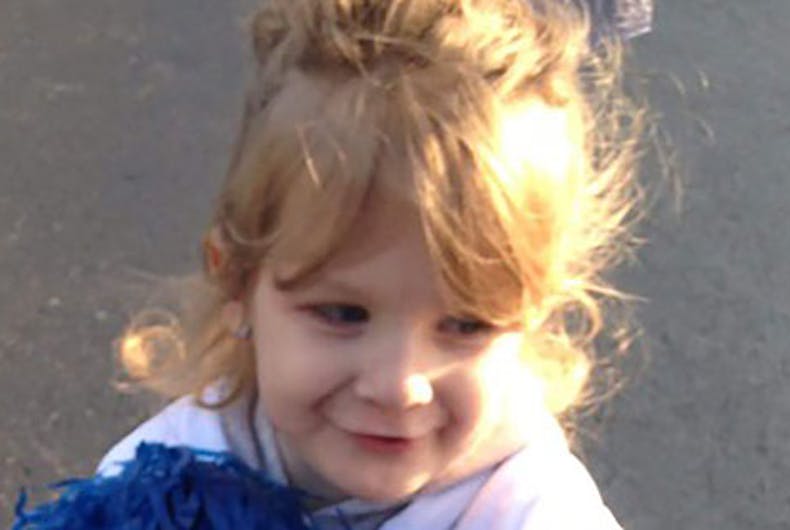 The Illinois state agency that is looking to formally take a transgender child away from her parents is denying it is behind any effort to force the 5-year-old to change her gender expression, in advance of a court hearing Tuesday.

The Department of Children and Families contacted LGBTQ Nation Monday to make a statement and answer questions about Stevie, a transgender girl who has been a patient at Advocate Children’s Hospital in Oak Lawn, Ill. for more than three weeks.

According a family friend, Stevie has epilepsy and type one diabetes, and was admitted to the faith-based hospital voluntarily. But according to the family’s attorney, hospital officials asked Stevie’s parents for permission to observe her without them present, using the term “therapeutic separation.”

Kathy Blazer-Williams posted on Facebook that when the parents finally were permitted to visit their daughter, they found her dramatically changed: her hair was shorter, she appeared thinner and was restricted to using “boy toys.”

Although Stevie’s parents invited the agency to look into the case last month, and it declined, that all changed one week ago Monday when DCFS took protective custody, without explanation. Until now.

“DCFS will continue working with the family, medical staff, and others to best serve the interests of Stevie while supporting the mother every step of the way,” Resa said.

The mother and father, who remain unidentified, told Blazer-Williams their daughter was being repeatedly referred to as “Stephen,” her legal name, and with male pronouns. Resa said DCFS would respect Stevie’s gender identity and denied that the agency had misgendered her.

Resa said the same answer applied for pronouns: “Whatever the mother calls the child.”

She also said the agency was not questioning Stevie’s transgender identity.

“I don’t think that was ever a question. DCFS has been committed to LGBTQ community and that has not changed,” she said.

Asked to respond to the agency’s statement, family attorney Rina Infelise told LGBTQ Nation: “At this time we are limited by what I can talk about because these are closed juvenile proceedings. What I can say is that Stevie’s parents and the family have cooperated fully and will continue to do so. They will continue to support, advocate, and fight for their daughter’s health and happiness.”

Given that the child is still hospitalized, and was admitted for medical reasons, there has been speculation that DCFS might have a reason to suspect Stevie was somehow endangered or a victim of abuse, even though there is no evidence to support such a claim.

“No, there is no immediate danger to this child,” Resa said, and then added, “No, no, no.” She repeated that the action by DCFS was temporary and solely for “medical issues.”

We contacted the director of Advocate Health’s public relations team again Monday and she once again referred all questions to DCFS.

The American Civil Liberties Union is working with the family attorney on Stevie’s case. Lambda Legal is said to have expressed interest in this, and the National Center for Lesbian Rights confirmed to LGBTQ Nation that it, too, is closely following her case.

Take a look inside the controversial practice of conversion therapy