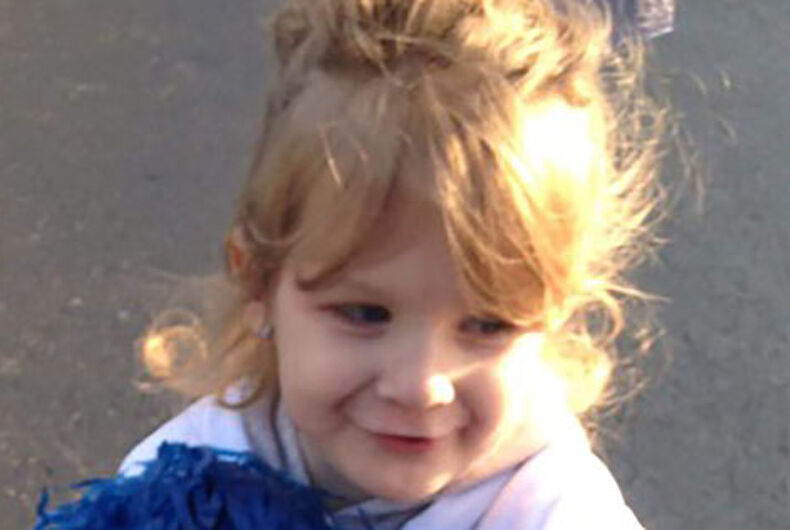 A Facebook post from the mom of a transgender girl has gone viral, as concerned friends and advocates plead for help for a family in Illinois. Kathy Blazer-Williams wrote that a five-year-old trans girl named Stevie, with a host of medical issues, is not only being kept from her parents by a faith-based hospital, but is being forced to live as a male, the sex she was assigned at birth.

A lawyer representing the family told LGBTQ Nation this all started last month, with the parents trying to get medical help for their daughter, who has type 1 diabetes and epilepsy. Although they agreed to something called a “therapeutic separation,” the attorney confirmed the parents never signed any documents surrendering their parental rights or authorizing any treatment of her gender identity, and in fact have attempted to have her moved to another hospital.

But last week, the Illinois Department of Children and Families reversed an earlier decision to not get involved. DCFS took protective custody of Stevie on Monday, according to the family’s attorney, Rina Infelise. She told LGBTQ Nation in a phone interview Sunday evening that this kind of move requires a legal hearing, and so both the parents and DCFS are due in court this week to face a judge, who will decide Stevie’s fate.

For the past few weeks, Stevie has been undergoing what Blazer-Williams described as something that appears to resemble so-called reparative or conversion therapy, which aims to change a transgender child’s gender identity.

The hospital is only giving her boy toys. Stevie is playing with the legos to build dolls, ghostbusters, ponies, and shopkins. They are refusing to use her name or pronouns, more importantly they are breaking this bright shiny happy child. Their reasons for taking her have changed several times, the accusations ridiculous. For weeks the hospital has lied and deceived, even claiming that Stevie admitted to being a boy to DCFS and was “happy, and doesn’t miss you” to the parents. Her parents are good people who wouldn’t care if she was a boy, if that was her choice. One look at her proved that was all a lie. The hospital took her because they couldn’t make her well and her family wanted to change hospitals . The family had also filed several complaints against the hospital, as recently as days before the “intervention”. Of course the fact that Stevie is ill could not be the hospitals faults, it must be the parents. After testing and proof she was in fact sick, they sunk their teeth into miscellaneous nonsense claims and the fact she identifies as female. For over a month the family has had an empty bedroom in their home. They are losing hope. Court seems to not want to step in against the hospital.

Stevie’s parents are not named in her post, but in a phone interview, Blazer-Williams said they are complying with the hospital’s demands in hopes of challenging them in court.

“They originally held her on a therapeutic separation,” Blazer-Williams told LGBTQ Nation. “She never signed anything. It was an oral agreement that does not require action by the court until after 30 days. Then the Department of Children and Family Service has to go to court for a temporary order to take custody. After that, they have a hearing. The first one was Tuesday, but went into continuance. Before that, DCFS did not involve the courts, and they are not legally obligated to.”

The American Civil Liberties Union is working with Infelise on Stevie’s case. Lambda Legal is said to have expressed interest in this, and the National Center for Lesbian Rights confirmed to LGBTQ Nation that it, too, is closely following her case.

And according to Blazer-Williams, both Stevie and her parents are suffering.

They saw her for the first time in nearly a month yesterday. That visit is why I am writing this. Stevie is being addressed as Stephen, and she affirmed several times “my name is STEVIE!”. As they walked in they were shocked. She had appeared to have lost weight (she had little extra to begin with), her hair was different and seemed possibly shorter, they taken all of her clothes dishes and toys, and her lips had an unusual cast. Her demeanor has changed dramatically . Her parents called me in tears after the visit, devastated for their child.

Blazer-Williams added hashtags to her post in hopes others will share it and get the word out:

LGBTQ Nation reached out to Advocate Health’s public relations team and its director referred all questions to the state Department of Children and Family Services. A spokesperson for DCFS has not responded to our inquiry as of press time.

Editor’s note: this story was updated to add new information about the hospital, that Stevie’s parents never signed anything surrendering custody of their child, and that on Monday the Department of Children and Families took protective custody of Stevie.

Documentary explores drag scene in city of the U.S. heartland