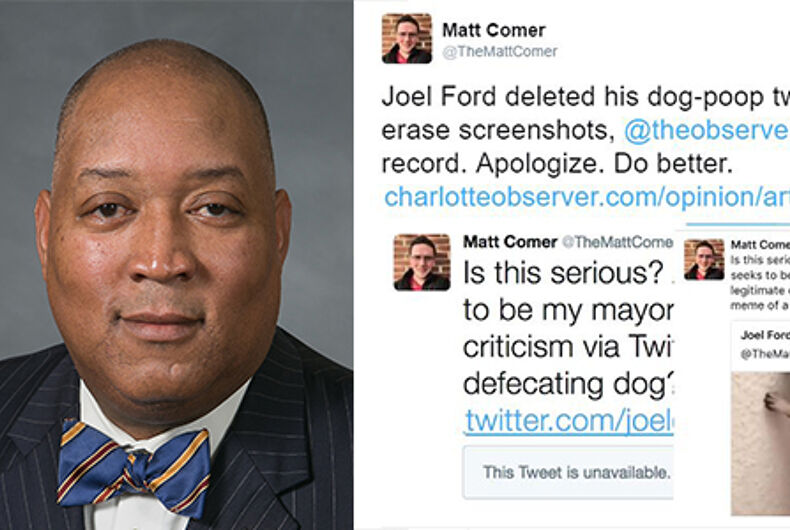 When called out for his poor record on LGBTQ rights, including voting to allow magistrates to recuse themselves from providing marriage licenses to same-sex couples and supporting compromise measures to repealing House Bill 2 (HB2), on Twitter he responding with a GIF of a dog pooping.

The offending tweet was sent to Matt Comer, who sits on the board of Charlotte Pride and is a former editor of Charlotte’s LGBTQ paper QNotes, after he criticized Ford’s record when another Twitter user called the senator “homophobic.”

Ford is seeking to be Charlotte’s next mayor, running against incumbent Jennifer Roberts and City Councilmember Vi Lyles, who called her opponent out for the tweet.

There's no room in Charlotte for "leadership" that fails to treat our #LGBTQ community with respect & dignity. That is not us.

Mayor Roberts and Lyles both voted to expand Charlotte’s non-discrimination ordinance to include LGBTQ protections. That began the battle with the state that led to the passing of HB2. The law requires transgender individuals to use bathrooms matching the gender on their birth certificates, invalidates all non-discrimination ordinances passed by cities and municipalities in the state, and caps the minimum wage at $7.25 an hour.

Lyles has since met with members of the North Carolina General Assembly to discuss a compromise.

Ford said he is in favor of most the protections for the LGBTQ community offered by the expanded non-discrimination ordinance, but was opposed to the provision allowing trans people to use the bathrooms consistent with their gender identity.

This is not the first time Ford has responded to critics of his LGBTQ record with a GIF, having previously tweeted out one of Anderson Cooper rolling his eyes when asked why he wouldn’t stand up for the community.

“To provide context, I am tired of being slandered by some people on Twitter as anti-LGBT and homophobic. I have worked to find solutions that are realistic and impactful but some people do not see it that way,” Ford said in a statement, The Charlotte Observer reports.

He called the GIF an example of a dog being creative in an uncomfortable situation.

Ford also said that he supports LGBTQ rights but won’t be “bullied or intimidated.”

“For some (LGBT) leaders it’s clean repeal or nothing, that’s not reality,” he said. “I agree that LGBT protections are important. But so are jobs, so are safe neighborhood and high-performing neighborhood schools.”

“There are significant concerns among LGBT leaders about where Joel Ford stands on LGBT equality,” Comer said. “He has been a supporter of compromises that will end up doing more harm to the LGBT community than good.”

Ford has apologized for the since deleted tweet and plans to meet with Comer in the future.

“I want to apologize to Matt Comer for my Tweet late last night. It was inappropriate and for that I am sorry,” Ford said in a statement, through campaign manager Dakota Cary, Spectrum News reports.

Update: @joeldford called 20mins ago to apologize for his tweet. Looking forward to having coffee w/ him soon. More: https://t.co/MxBsyoztWS

We'll be sitting down w/ a couple others who have had concerns about his record. I'm looking forward to it. Thank you Sen. Ford. https://t.co/KtRmOmZS3M

Cary said that Ford will be limited in the GIF department going forward due to his bad judgement, WFAE reports.

Cary said Ford chose the GIF from the “awkward section,” explaining, “He used that one because he thinks that when people like that come for him on Twitter… it’s easier than sitting down and typing out the same response each time.”

He will now be given a restricted set of GIFs from which to choose to express his upset, without having to expend the labor of using his words.

“None of the GIFs that we’ve been using have been well received, and so I think there’s a disconnect between trying to use GIFs as a way to communicate with people and what they actually mean,” Cary said. “You end up with a problem like this where what he wants to convey and what comes across (are) two different things.”