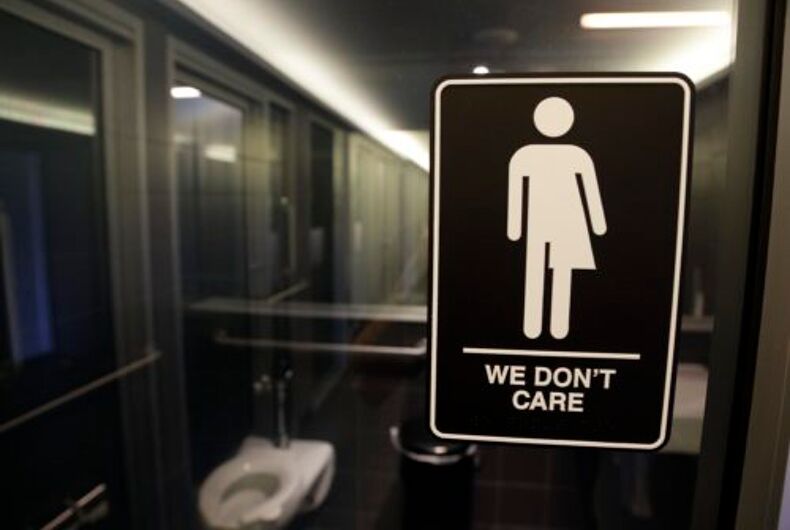 A new poll finds that most Americans oppose so-called “bathroom bills” that limit the rights of transgender people.

Fifty-three percent of the Americans surveyed oppose laws requiring transgender people to use bathrooms that match their gender at birth instead of their gender identity, according the poll, conducted by the nonpartisan group the Public Religion Research Institute.

Thirty-nine percent were in favor of such laws, while nearly one in ten of the 2,031 adults surveyed in February by telephone had no opinion, reports Reuters.

The issue breaks down along party lines, with most Democrats and independents opposing the laws and most Republicans favoring them.

“This is a case where it really is Republicans kind of pulling away and being more of an outlier to the rest of the country,” said Robert P. Jones, chief executive of the Washington-based group.

The survey comes as North Carolina continues to cling to their anti-LGBTQ law House Bill 2, which includes a provision requiring transgender people to use bathrooms matching the gender on their birth certificate when in government owned buildings.

Texas is currently deciding whether or not it will follow the same path.

The Trump administration also recently backed away from supporting transgender student rights concerning what facilities they are able to use in public schools.

The poll also found that support continues to grow for same-sex marriage, with 63 percent saying they are in favor, up from 52 percent in a 2013 poll.

White evangelicals are the only religious group still opposed to same-sex marriage, the poll found, according to Jones.

Arkansas rejects bill that would have allowed hospitals to discriminate

In a sign of the times, dystopian fiction is flying off the shelves