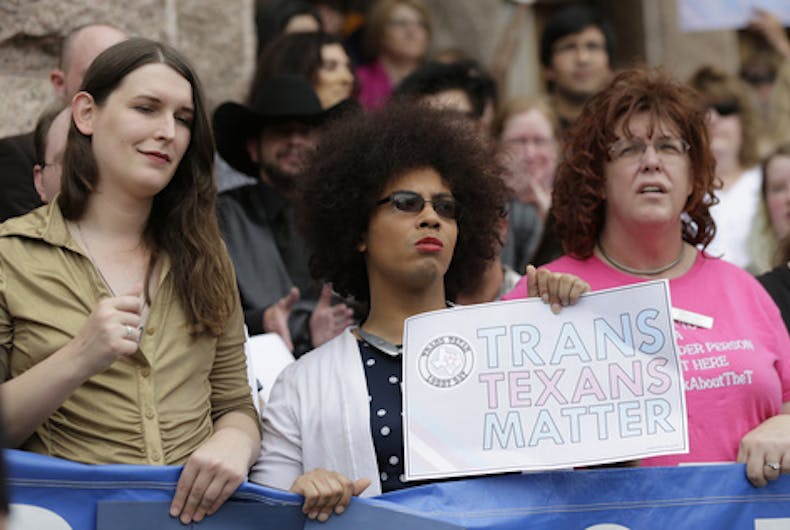 Members of the transgender community take part in a rally on the steps of the Texas Capitol, Monday, March 6, 2017, in Austin, Texas. The group is opposing a "bathroom bill" that would require people to use public bathrooms and restrooms that correspond with the sex on their birth certificate. Photo: (AP Photo/Eric Gay)

A North Carolina-style bathroom bill has cleared a first vote in Texas after 13 consecutive hours of public comment dominated by transgender-rights supporters who scolded the measure.

A Senate committee early Wednesday advanced the proposal that would require people to use public bathrooms that correspond with the sex on their birth certificate. The bill has drawn backlash from big businesses including Google and the NFL.

The 7-1 vote came nearly 21 hours after the start of the hearing that packed the Texas Capitol. Parents of transgender schoolchildren were among more than 400 people who signed up to give often emotional testimony.

The turnout created a scene that rivaled the intensity and emotion of a vote last month over a ban on so-called “sanctuary cities” that don’t cooperate with federal immigration officials. But whereas that divisive proposal passed over occasional protests in the Senate gallery, lawmakers discussing the bill in committee this time gathered in a smaller room that made for easier crowd control.

The bill would require transgender people to use public bathrooms that correspond with the sex on their birth certificate. But unlike in North Carolina, where the law known as HB2 passed a year ago with broad Republican support, the Texas bill has split conservatives and faces a tougher road. Republicans pushing the bill say they’re trying to protect women’s privacy in bathrooms.

Large numbers of bill supporters also turned out in droves and waited throughout the day and evening to tell lawmakers why they support it. Among them was the superintendent of a tiny Texas school district that sued last year over former President Barack Obama’s attempts to strengthen transgender rights in public schools nationwide. President Donald Trump has since rescinded those school orders.

The sheer turnout stretched the meeting for hours but the bill’s clearing the committee was a near certainty. Still, Republican House Speaker Joe Straus again made clear he has little appetite for the bill even if it does clear the Senate and, on top of that, Republican Gov. Greg Abbott hasn’t given a public endorsement.

“They have their agenda, we have ours,” Straus said Tuesday.

The proposal now goes to the full Senate but faces resistance in the House.