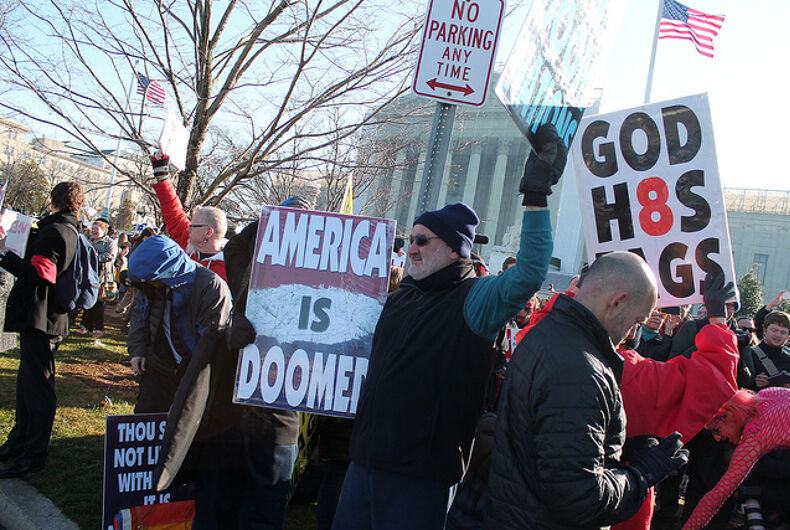 There is no reason to talk politics with anyone who disagrees with you. You can never really change anyone’s mind.

Chances are you have heard that argument more times than you can count, and it is nonsense. While there is science to suggest people dig in their heels when presented with facts disputing their worldview and just became more convinced, it is also possible to help a person come to a new understanding. Minds can change, as evidenced by, for one, Megan Phelps-Roper.

Phelps-Roper grew up in the Westboro Baptist Church, holding “God Hates Fags” and “Thank God For Dead Soldiers” signs at their infamous pickets by the time she was just 5-years-old. In a recent TED Talk, she outlines her involvement with the controversial church and what caused her to leave: conversations with those she strongly disagreed.

“In my home, life was framed as an epic spiritual battle between good and evil.The good was my church and its members, and the evil was everyone else.My church’s antics were such that we were constantly at odds with the world, and that reinforced our otherness on a daily basis,” she recalled.

The church is active on Twitter, as are its individual members. Phelps-Roper was no exception. She used social media to spread the messages she learned from her church and her family, but when people on Twitter challenged her beliefs, it made her begin to question.

“Someone would arrive at my profile with the usual rage and scorn. I would respond with a custom mix of Bible verses, pop culture references and smiley faces,” she said.They would be understandably confused and caught off guard, but then a conversation would ensue. And it was civil, full of genuine curiosity on both sides.How had the other come to such outrageous conclusions about the world?”

“It took time, but eventually these conversations planted seeds of doubt in me,” she continued. My friends on Twitter took the time to understand Westboro’s doctrines, and in doing so, they were able to find inconsistencies I’d missed my entire life. Why did we advocate the death penalty for gays when Jesus said, ‘Let he who is without sin cast the first stone?’How could we claim to love our neighbor while at the same time praying for God to destroy them? The truth is that the care shown to me by these strangers on the internet was itself a contradiction. It was growing evidence that people on the other side were not the demons I’d been led to believe.”

She left the church in 2012, and she believes that her evolution is evidence that dialogue works, and that we need it now more than ever.

“We’ve broken the world into us and them, only emerging from our bunkers long enough to lob rhetorical grenades at the other camp. We write off half the country as out-of-touch liberal elites or racist misogynist bullies,” she continued. “No nuance, no complexity, no humanity. Even when someone does call for empathy and understanding for the other side, the conversation nearly always devolves into a debate about who deserves more empathy. And just as I learned to do, we routinely refuse to acknowledge the flaws in our positions or the merits in our opponent’s. Compromise is anathema. We even target people on our own side when they dare to question the party line. This path has brought us cruel, sniping, deepening polarization, and even outbreaks of violence. I remember this path. It will not take us where we want to go.

“What gives me hope is that we can do something about this. The good news is that it’s simple, and the bad news is that it’s hard. We have to talk and listen to people we disagree with. It’s hard because we often can’t fathom how the other side came to their positions. It’s hard because righteous indignation, that sense of certainty that ours is the right side, is so seductive. It’s hard because it means extending empathy and compassion to people who show us hostility and contempt. The impulse to respond in kind is so tempting, but that isn’t who we want to be. And I will always be inspired to do so by those people I encountered on Twitter, apparent enemies who became my beloved friends. And in the case of one particularly understanding and generous guy, my husband.”

Watch her TED Talk below.