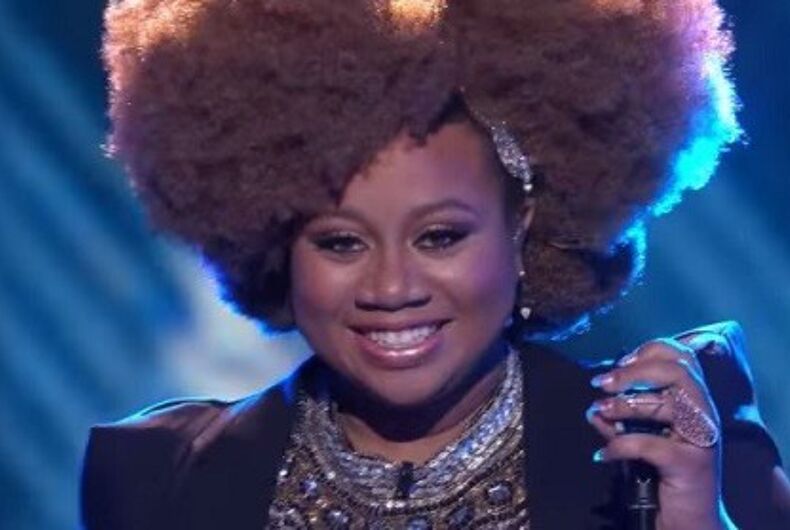 Singer La’Porsha Renae, known for appearing on the final season of American Idol, claims she chose to be straight after spending two years gay.

Renae has previously said she doesn’t “agree” with the LGBTQ “lifestyle” when asked about Mississippi’s “religious freedom” law, House Bill 1523. She added that she “wasn’t brought up that way.”

She later apologized for causing offense with her comments.

Renae was recently called out by a fan on Twitter, who accused her of being homophobic. She denied the charge in a series of tweets, ending in her bizarre claim that she had chosen her current orientation after talking a walk on the queer side for a couple of years.

Renae sent an email to The Huffington Post to further explain, which is full of platitudes and more promises that she loves everyone and has a diverse friend group:

Let people believe what they want to believe about themselves. Life can be a complex thing. It’s not always black or white. I took a journey and became more grounded in my faith, and decided that I wanted to live a heterosexual life. The main point I want people to take away from my Tweets is that we are all shaped by different experiences, and we should all love and respect one another. We don’t have to have the same truths or personal belief systems to love one another and get along. I have homosexual friends and family. I believe in God and Jesus, my christ and savior, yet i have CLOSE friends who are atheists, friends who are Muslims, friends who are Jewish, friends who are transgender and believe God gave them the wrong body… We ALL LOVE ONE ANOTHER… we don’t try to “convert” each other and we don’t CONDEMN each other for how different our walks of life are.

Everyone should have to right to believe in what they believe in and to live their lives the way they feel they want to. Me choosing to be straight does not in any way reflect on my love for homosexuals. I’ve been told that I’m a bigot, a hypocrite, a gay basher, a homophobic. I’m none of those things. I LOVE EVERYONE. ANYONE is welcome to hang out with me and have fun, or sit down with me and talk. I don’t discriminate against anyone. And I don’t condone hating someone or treating them badly because they live differently than I do. I so wish that people knew me for who I really am, but I don’t have that privilege. Social media takes a statement like, “Despite our different beliefs, we should be able to love and respect each other and treat each other with kindness” and turns it into “LaPorsha Renae Hates LGBTQ community.”

The ex-gay, conversion therapy movement has been thoroughly debunked as garbage science, resulting in harm to those who go through it in an attempt to change their sexual orientation.

Historic gay landmark to close while another hopes for recognition