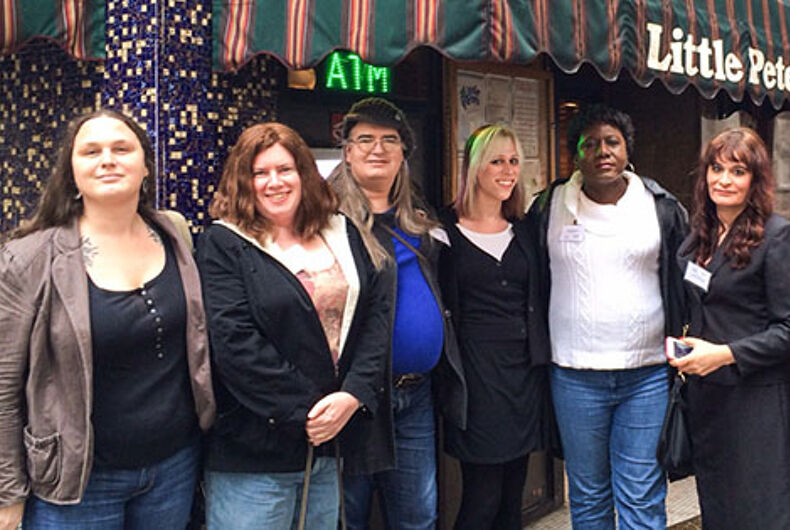 Two LGBTQ historic eateries, 3,000 miles apart, are famous for what happened there half a century ago. But while one is cooking-up some long overdue recognition, the other is serving its last meals in preparation to go out of business.

Memorial Day is the last day for Little Pete’s in Center City Philadelphia, as a new hotel is set to rise later this year at that location, across from another hotel where LGBTQ journalists and bloggers held a conference in 2015. Seven trans women attending the convening, sponsored by NLGJA: The Association of LGBTQ Journalists, posed for a photo at the historic site and paid their respects (pictured above).

As JoeMyGod reported, Little Pete’s is just the latest establishment to close its doors at 17th Street and Chancellor. In 1965, the place was called Dewey’s, part of a chain, and the location just off Rittenhouse Square openly refused gay customers and anyone wearing gender non-conforming clothing.

On Sunday, April 25, 1965 — four years before the Stonewall riots — more than 150 people of a variety of races, orientations and gender identities staged a protest. Police arrested three people, and more sit-ins followed until the owners finally relented and ended their discriminatory practice.

That demonstration preceded a picket line staged outside Independence Hall in Philadelphia on July 4th of that year, an event the city heralds as a spark that helped light the gay rights and ultimately LGBTQ rights movement.

Across the country in San Francisco, the Paper Doll is believed to be that famously welcoming city’s first restaurant and nightclub catering to the gay community. And according to The Bay Area Reporter, the building at 524 Union Street in North Beach where it hosted queer patrons decades ago is now being considered for landmark status.

If its application is approved this fall, the site would be the first property in the city to be designated a landmark for its LGBTQ historical significance that is located outside the Castro.

“I would say no one knows about the Paper Doll,” Shayne E. Watson told the site. She is a lesbian and architectural historian who is working with the family that owns the site on their city landmark request. “I think so much of the focus of LGBTQ history has been post-1965, so unless you are really looking for this earlier history, it is often easily overlooked.”

Historian and SF State Prof. Nan Alamilla Boyd including the Paper Doll in her book about San Francisco’s LGBTQ community, Wide Open Town. She noted that it served as an ad hoc community center where patrons “could make friends, find lovers, get information, or plan activities.”

Charlotte Coleman, a lesbian activist and entrepreneur who worked at the Paper Doll, is quoted by Boyd as calling it the place “where we all met and grew up.”