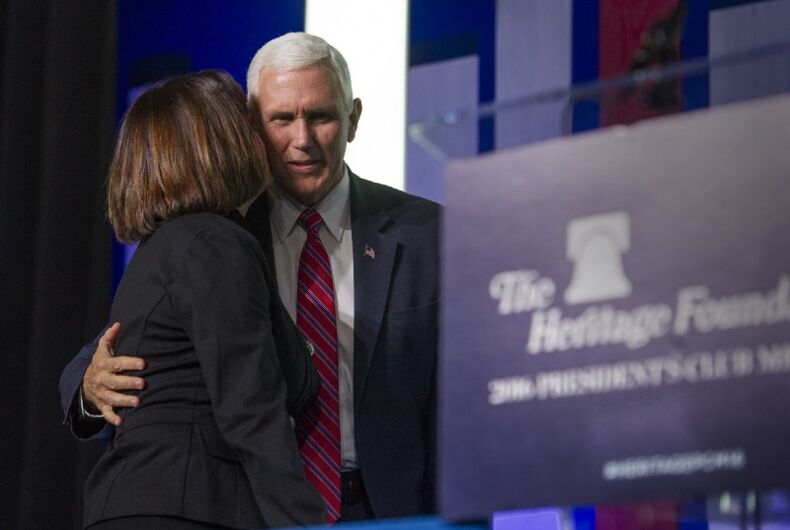 Conservative think tank The Heritage Foundation played a key role in the Trump transition team and are out with a new report offering their far right perspective on “religious freedom” laws that should concern all LGBTQ rights advocates.

The argument between the far right and more moderate conservatives lies in whether creating religious exemptions to nondiscrimination law is sufficient or if offering any protections for LGBTQ people is a step too far. The Heritage Foundation takes the view that to provide protections based on sexual orientation and gender identity are “unjustified.”

“Current proposals to create new LGBT protections with varying types of religious exemptions will not result in fairness for all. Instead, they will penalize many Americans who believe that we are created male and female and that male and female are created for each other,” the report, titled “How to Think About Sexual Orientation and Gender Identity (SOGI) Policies and Religious Freedom.”

The report goes on to claim that “the burden is on their proponents to prove the need for such laws” and that so far “proponents have failed to carry their burden on all counts.”

That would be news to at least one court that ruled a baker in Colorado could not use a religious freedom argument in denying to bake a cake for a same-sex wedding.

A similar case in Oregon resulted in bakers being fined after it was decided that their decision to not bake a cake for a gay wedding was a case of discrimination. The state has a religious exemption in place but only for religious organizations.

The Heritage Foundation argues that “bakers, florists, photographers, adoption agencies, schools, and providers of services to the needy have been penalized or threatened not because they discriminated against someone because they identify as LGBT, but because they judged in conscience that they could not endorse certain morally relevant conduct.”

However, as The Heritage Foundation tells it, you have no right to not be discriminated against, but you do have unfettered rights to act how you wish in accordance with your religious beliefs.

“While there can be good justifications for certain antidiscrimination policies, there is not a human right to them. Religious freedom, however, is a human right,” the report states.

It goes on to claim one’s sexual orientation and gender identity are based in part on “actions” that are “subject to moral evaluation, while one’s status in terms of race and sex is not.”

This runs counter to what the American Psychological Association has to say on sexual orientation and gender identity.

A leaked draft of an executive order offering “religious freedom” protections that President Trump could sign into law shows the administration could take the issue even further than many worried. While sources claim Ivanka Trump and her husband, and adviser to the president, Jared Kushner put the breaks on that plan there are still murmurs suggesting it could come at any time.

Even if it doesn’t, there is still the First Amendment Defense Act, which is expected to be introduced into Congress any day now and which would also provide “religious freedom” exemptions. Trump has pledged to sign it if passed.

Most Americans oppose religious-based refusals of service to the LGBTQ community, a recent poll by Public Religious Research Institute found.