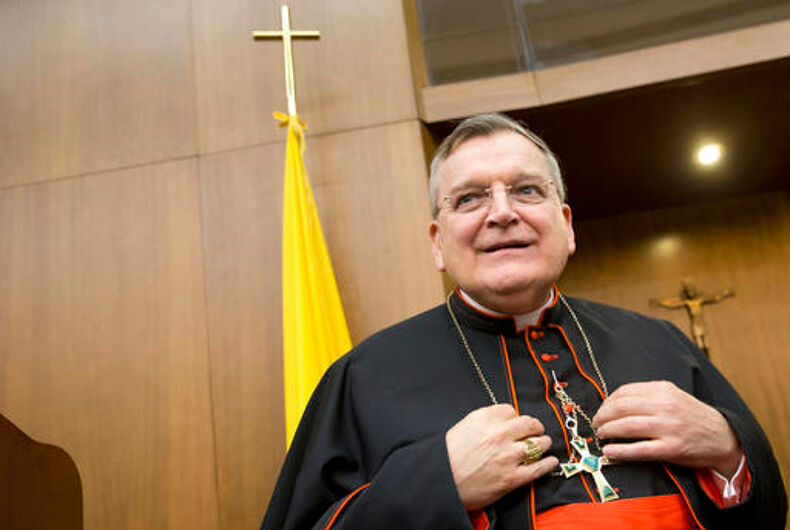 FILE -- In this Oct. 14, 2015 file photo, Cardinal Raymond Leo Burke arrives for the presentation of his book Divine Love Made Flesh, in Rome. The Pacific Daily News reports that Cardinal Raymond Burke is scheduled to interview a former altar boy who says he was sexually abused by Guam Archbishop Anthony Apron. Photo: (AP Photo/Andrew Medichini)

HAGATNA, Guam (AP) — A former altar boy who has accused Guam’s longtime archbishop of sexually abusing him refused Thursday to testify before a Vatican court headed by American Cardinal Raymond Burke on the grounds that he couldn’t have his lawyer present.

Roland Sondia met with Burke and other Vatican officials who travelled to the Pacific island U.S. territory to take testimony for the trial of Guam Archbishop Anthony Apuron, attorney David Lujan said.

Lujan said the proceedings were “worse” than he had expected because he wasn’t allowed to be present to advise his client, who was to have been “questioned by the prosecutor, who is a priest, and Archbishop Apuron’s lawyer, who is a priest, and a presider who is Cardinal Burke, and a notary who is also a priest.”

“We felt it wasn’t in my client’s best interest to be in that position,” he said. He said Sondia may submit a written declaration instead.

Apuron is facing multiple allegations of sex abuse of altar boys in the 1970s. Sondia, now an adult, has publicly accused Apuron of molesting him when he was 15. Apuron has denied the claims and has not been criminally charged.

Lujon said another witness — the mother of a deceased altar boy who also accused Apuron — would also refuse to testify.

It wasn’t clear how the lack of testimony would affect the church trial. The alleged victims have sued Apuron, the archdiocese and other individual priests in U.S. courts, which could explain their reluctance to testify in a separate legal procedure. Those lawsuits were made possible after the Guam legislature last year passed a law that lifts the civil statute of limitations for child sex abuse.

The Vatican confirmed Thursday that Burke in October had been named presiding judge in the Vatican trial — an unusual revelation given that even the existence of such church trials is usually kept confidential. The Apuron case, though, has played out under heavy public scrutiny in Guam.

Burke’s role raised eyebrows in Rome because he has recently been involved in some high-profile clashes with Pope Francis.

Burke, a top canon lawyer, had headed the Vatican’s high court until 2014, when Francis removed him and named him patron of the Knights of Malta religious order. Francis recently sidelined Burke from that position after Burke was involved in the problematic ouster of a senior knight.

Burke’s defense of church doctrine has made him a hero to conservative and traditionalist Catholics upset with Francis’ mercy-over-morals priorities. He is one of four cardinals who asked Francis to clarify his controversial opening to divorced and civilly remarried Catholics.

Survivors of clerical abuse, though, have long criticized Burke’s record as an archbishop in the U.S. in handling cases of abusive priests. Burke has said every act of abuse by clergy is a “grave evil.” But he has also blamed gay clergy for the church’s sexual abuse crisis, saying priests “who were feminized and confused about their own sexual identity” were the ones who molested children.

Getting past internalized homophobia is like a 12-step program