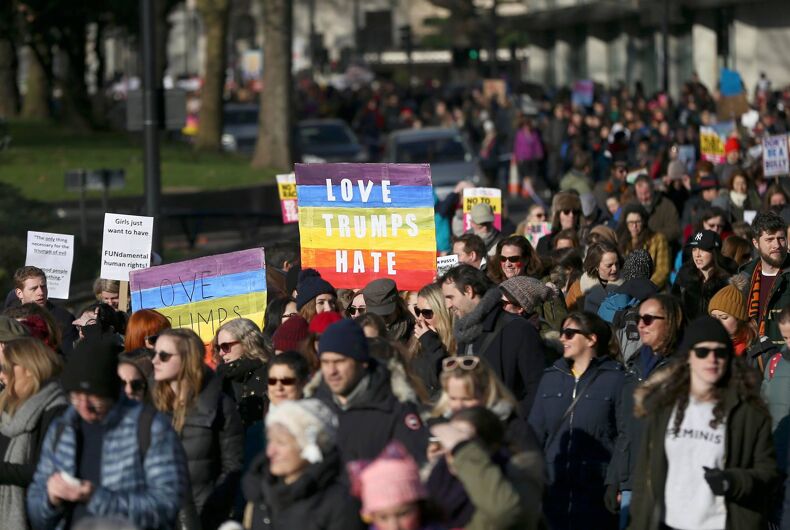 Since President Trump signed an executive order that stops entry of residents from seven majority-Muslim countries from entering the United States and suspended admittance of refugees from Syria, a contentious debate has been raging not only generally among differing political and social factions in the U.S. but, specifically, among individuals and groups within lesbian, gay, bisexual, trans, and queer communities.

Toward one side of the continuum of opinions LGBTQ people assert that Trump’s actions pose not only constitutional issues, but also position the United States across the world as a discriminatory nation acting contrary to its own ethical and moral standards by stigmatizing entire groups of people based on their country of origin and religious beliefs.

Those toward the other side assert that some if not all the countries on the barred list persecute LGBTQ people within these countries, and, therefore, we must send a clear and strong message by ending, at least for a time, entry into the United States. Anything else would be to condone the oppression.

The timing of Trump’s order has particular poignancy coming as it has just under seven months after Omar Mateen, the lone known attacker who was inspired by ISIS, shot and killed 49 people and injured several more at Pulse, a gay club in Orlando. Some LGBTQ people assert that since conclusive documentation shows that ISIS regularly arrests any male even suspected of homosexuality, tortures them, and tosses them from high roof tops, where crowds below pelt their lifeless bodies with stones after they hit the ground, immigrants and refugees could have been taught to hate our community.

In addition, in Iran since the Iranian Islamic Revolution of 1979 (which replaced the Shah with an orthodox Shiite theocracy) many segments of the population have experienced repression under Iranian Sharia law. Among the segments include LGBT inhabitants.

Since 1979, some human rights activists estimate between 4000 – 6000 LGBT people have been executed in Iran. Same-sex sexuality between consenting partners in private is defined as a crime. Iranian law condemns males involved in sexual penetrative acts (sodomy or lavat) with the possibility of death, and so-called non-penetrative acts with flogging. After the fourth non-penetrative “offense,” the penalty is death.

Females convicted of engaging in same-sex sexuality (mosahegheh) may be made to undergo flogging with 50 lashes. And following the fourth conviction, they too are eligible for the death penalty (Articles 127, 129, 130).

Following the Islamic Revolution, trans identity and expression were also classified as crimes. However, the government reclassified these in 1986 as “heterosexual” if the person undergoes gender confirmation (formerly known as “sex reassignment”) surgery. Today, Iran stands as the country performing the most gender confirmation surgeries in the world, second only to Thailand. Iranian trans people, however, still suffer frequent harassment and persecution.

Throughout his run for the White House, Donald Trump stereotyped and scapegoated Muslims and anyone from Muslim-majority counties, as well as Mexicans and all Latinx people as the internal and external enemies of the United States. It is notable that Trump signed an executive order to construct a wall on our southern border and called for the suspension of travel from people coming from seven Muslim nations and an indefinite end to legal immigration of Syrian refugees fleeing their war-torn nation.

While travelers and refugees from these targeted nations may have been exposed to extreme heterosexist and cissexist ideologies, policies, and actions, and while some, though certainly not all, have internalized what they were taught, this alone must not and cannot disqualify them in the minds of LGBTQ people from traveling or immigrating to our shores.

In fact, some LGBTQ people are coming to the U.S. to avoid prosecution. In addition, progressive Muslims in the United States and abroad are clearly supportive of LGBTQ people, and do not abide by some of the radical doctrines espoused in orthodoxy.

If this were the case, then we must restrict entry travel and deport anyone and everyone holding similar views from all religious and secular backgrounds, including members of the conservative Christian theocratic right. But, as we know, Trump would never even think of doing so, especially since the voice of Steve Bannon, the mouthpiece for the white racist nationalist right, resounds in his ear.

Research by the New America Foundation found that the greatest threat of terrorism in the United States since the attacks on September 11, 2001 have come from anti-government radical white supremacist groups. Researchers of the study have asked, then, why have no members of these groups been taken and put away in prison at Guantanamo Bay? Why have no drones dropped bombs on the leaders and rank-and-file members?

Islamophobia can be defined as prejudice and discrimination toward the religion of Islam and Muslims who follow its teachings and practices. Like racism and sexism, for example, Islamophobia is much more than a fear, for it is a taught and often learned attitude and behavior, and, therefore, falls under the category of oppression.

Donald Trump, with his Islamophobic rhetoric and policies, functions as the Recruiter-in-Chief for ISIS and other extreme terrorist groups and regimes because he personifies the tyrannical Christian crusader waging war on Islam. His unilateral policies drafted and delivered without consultation with our friends throughout the world threatens to destroy long-established and mutually-successful alliances.

A recent CNN/ORT poll found that 55% of U.S. residents oppose Trump’s travel ban, and 60% do not want the government to construct of a border wall with Mexico.

The good people (including significant numbers of LGBTQ people) who are taking to the streets, social media, phones, and the written and spoken word to oppose Trump’s clearly discriminatory and retrogressive policies will make America great again.

After photog refused to shoot their wedding, this couple got an amazing surprise