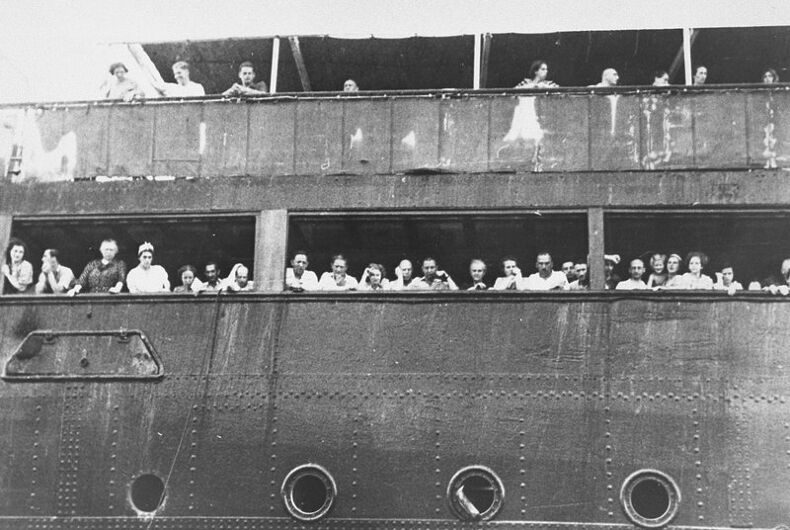 Jewish refugees, aboard the St. Louis, were denied entry into the United States in 1939.Photo: Wikimedia Commons

Trump’s public statement commemorating International Holocaust Remembrance Day omitted any mention of Judaism, anti-Semitism, or the Nazis’ systematic program exterminating European Jews. The omission was not only hurtful to remaining Holocaust survivors, their families, and friends, but it was dismissive of its six million victims during World War II.

Ironically, Trump’s immigration ban on Muslims was issued the same day the White House released his Holocaust Remembrance Day statement, and like the many Jews who perished in the Holocaust because the U.S. government wouldn’t grant them asylum, so will many Muslims.

While the White House claimed the president’s generic statement on suffering was intended to be an all-inclusive acknowledgment of other groups killed by the Nazis — Gypsies, political dissidents, non-Aryans, to name a few — Elie Wiesel, at the ceremony marking the 50th anniversary of the liberation of Auschwitz in 1995, stated it best, saying, “It is true that not all the victims were Jews. But all the Jews were victims.” In other words, eliminating Jews was the central organizing principal for the rise of the “Third Reich.”

In this Trump era of “post-truth” politics and “alternative facts” that unabashedly challenges, exaggerates, lies and outright negates legitimate facts, orthodox interpretations, and overwhelming evidence, the president acknowledging the Holocaust and not mentioning Jews and anti-Semitism is like making a public statement acknowledging American slavery and not mentioning blacks and racism.

We have normalized anti-Semitism in this country to the point it is not only pervasive, but sadly, it is also invisible to some. For example, during Trump’s campaign he was condemned by Jewish leaders for what appeared on his anti-Hillary poster: the Star of David layered over $100 bills. Trump barked back telling his critics the star was a sheriff’s badge.

Since Trump has taken office, however, there has been a noticeable uptick in anti-Semitic assaults and sights of swastika signs across the country, even in unlikely places such as Cambridge Rindge and Latin School (CRLS), a bastion of liberalism, tolerance and multiculturalism. Early in December 2016, the school newspaper, Register Forum, reported that swastikas were drawn on two bathroom walls. The third-floor boys’ bathroom had a swastika next to the message “The power lost of this sign will be made great again with President Trump.”

Elaine Schear, who is the co-founder and executive director of Friends of CRLS and the parent of two CRLS alumnae, advises people not to underestimate the influence of these messages.

“I think we need to be realistic about the current trickle-down toxic messages seeping in everywhere, and in Cambridge, as we’re seeing, their power to impede the commitment to social justice in our schools, and to test the fundamental values of opportunity, diversity, respect,” she said, referencing three values that CRLS prioritizes.

At best, Trump’s statement re-frames the Holocaust, highlighting the event but deflecting from the magnitude of its human carnage.

Along with the six million Jews it killed, Nazi Germany’s plan to exterminate gay men is a classic example of how politics informed their science. Paragraph 175 of the German Criminal Code differentiated between the type of persecution non-German gay men received from German gay men because of a quasi-scientific and racist ideology of racial purity.

“The polices of persecution carried out toward non-German homosexuals in the occupied territories differed significantly from those directed against Germans gays,” wrote Richard Plant in The Pink Triangle: The Nazi War Against Homosexuals. “The Aryan race was to be freed of contagion; the demise of degenerate subjects were to be hastened.”

Although laws against lesbianism had not been codified and lesbians were not criminalized for their sexual orientation as gay men were, homosexual German women were nonetheless viewed as a threat to the Nazi state and were fair game during SS raids on lesbian bars, sentenced by the Gestapo, sent to concentration camps, and branded with a black triangle. As a matter of fact, any German woman — lesbian, bisexual or heterosexual — not upholding her primary gender role “to be a mother of as many Aryan babies as possible” was deemed anti-social and hostile to the German state.

By not directly acknowledging the Jewish victims of the Holocaust but rather reducing them to a simple statement, “in the name of the perished,” Trump glosses over the Holocaust’s distinct historical circumstances that explain how preexisting prejudices and fears were stoked and amplified against Jews. He also conceals and denies German-Christian anti-Semitism, and erases the unique stories of survival, bravery and resistance by Jews and their allies.

“Seventy-five years ago my mother’s family was being murdered in Poland because they could not escape,” said Leora Tec, founder and director of Bridge to Poland, which offers tours to Poland focusing on Jewish life before and after the Nazi’s occupation.

Her mother, 85 year-old Nechama Tec, survived the Holocaust by posing as a Catholic girl sheltered by a Catholic family and wrote about her rescue in her book, When Light Pierced the Darkness: Christian Rescue of Jews in Nazi-Occupied Poland. Leora explains how the fate of her mother and her mother’s family might have been different had it not been for people taking them in as refugees, which is what they were considered at the time.

“In 1946, after the war, people wanted to murder my grandfather in Poland so my mother’s family left. They were refugees in Germany,” she said. “Refugees are not a caricature, a uni-dimensional creation of a limited mind. What they really are are human beings. They could be you or me tomorrow, and very likely there were some in your family’s not so distant past.”

Leora added “knowing that people will stand up for others even under the threat of death gives me hope in these dark times.”

Her mother was fortunate to have survived, but so many others didn’t. However, it is very likely that they could have, had the U.S. opened their borders to them — a striking parallel to what we are seeing today with Trump’s recent immigration policies.

History has a funny way of repeating itself. Failing to specifically acknowledge the Jews who suffered and perished in the Holocaust undermines the significance of the devaluation of their lives in Nazi Germany, and adds more fuel to the fire surrounding Trump’s immigration restrictions; a fire that suggests he doesn’t see the value of Muslim lives.

Watch: LGBTQ Trump supporters complain about being ‘excommunicated’ by peers