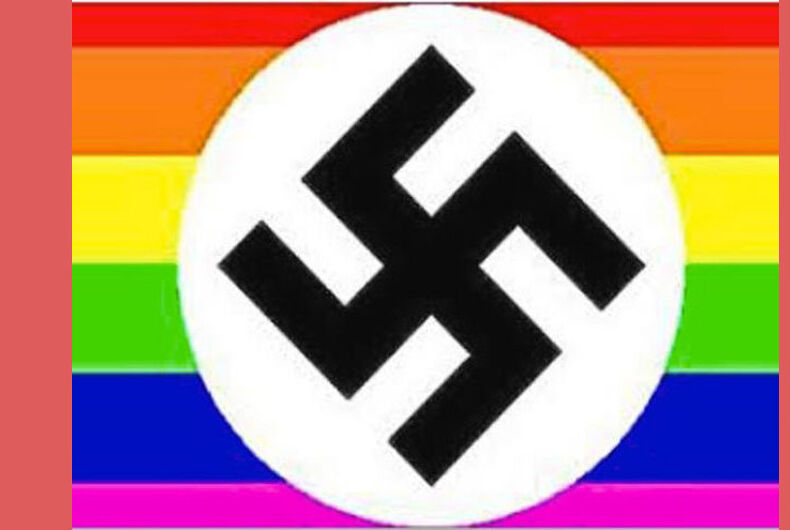 But when she shared an article from a right-wing group, conservatives4palin, that’s exactly what happened.

As first reported by MeanRead blogger Adrian Glass-Moore, Thomas Schmitz wrote an article titled, The Forgotten Gays Part II: Is the LGBT On Crack? and very prominently included the image of a rainbow-striped flag and a big, bold swastika. The image has its roots in ancient Hindu as well as Native American culture, and to this day it’s also a revered symbol in Buddhism, Jainism, and Odinism. But since the early part of the last century, it has come to represent Nazism.

In her latest post Wednesday, Myrdal told followers and friends that she was “unaware of” the image — despite it being the very first thing on the website following the article’s headline. And, without apologizing to anyone who took offense, she noted that “as a daughter of a family that suffered under the said image, I deplore this image and I would never post this image on purpose.”

The article she shared — and then deleted following the posting of MeanRead’s blog — was an op-ed about Jennifer Holliday’s decision to back out of performing at one of the events heralding President-elect Donald Trump’s inauguration Friday.

“Singer Jennifer Holliday is literally afraid to sing at the Trump Inauguration. Why? Because current leadership of the LGBT movement has been targeting, threatening, and attacking her. That’s messed up,” wrote Schmitz, who took a patronizing attitude to address the self-hating gays who would accidentally read something called conservatives4palin.

“Let’s go straight to the core problem. The core problem is the current direction of the LGBT movement. The LGBT movement is laser focused on being a for-profit professional agitation group. An agitation group who targets and attacks citizens opposed to the Democrat agenda. When American citizens stray from the Democrat plantation, they are isolated, polarized, and destroyed. This is irresponsible. This is wrong. This is Un-American.

“The LGBT has got to get it together and distance themselves from this type of behavior. This is not helping to bring the country together.

“I can’t believe I have to explain this again. Seriously, I have explained this dozens of times. Here we go again. Listen up LGBT: President Elect Donald Trump has no beef whatsoever with gay Americans. None. Got it? Good.”

As The Dickinson Press reported, Myrdal said by telelphone that she would not address this incident beyond her Facebook explanation. “We’re going to leave it at that,” Myrdal told the paper in her brief phone call, refusing to answer why she posted the easily-identifiable symbol of hate and oppression.

Editor’s note: this article has been updated to give a hat-tip to both MeanRead.com and The Dickinson Press for its original reporting, which was previously attributed to another site. Also, more detail was added to better explain the multicultural origins of the swastika symbol.